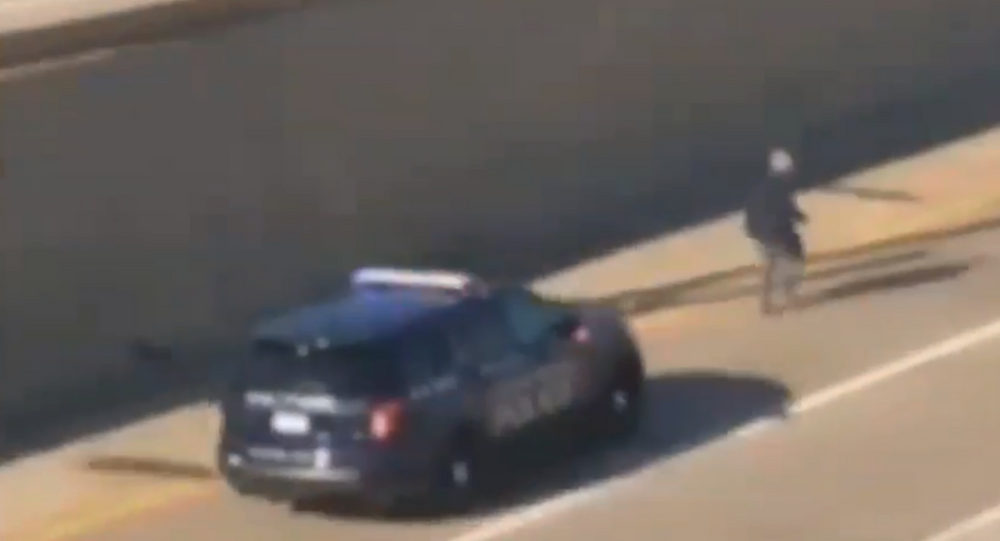 Michigan officers sent a murder suspect flying into the air last week by striking him with a police cruiser as he attempted to flee the scene on foot, video footage obtained by bystanders inside a nearby building shows.

The incident, which unfolded on Thursday, was filmed by workers inside an office building that overlooks the S-curve portion of US highway 131 in Grand Rapids. The police chase stemmed from a homicide investigation in which the suspect, 33-year-old Adam Kenneth Nolin, was believed to have fatally shot his girlfriend, 27-year-old Tia Randall, at their home in Wyoming, Michigan.

Footage of the encounter captures the moments officers zeroed in on Nolin on US 131 after the suspect had already crashed his vehicle and exchanged fired with officers. Officials on the scene were from the Grand Rapids Police Department and the Wyoming Police Department.

​"I looked up and I see the truck sideways and I hear the crash," Karin Kapteyn, one of three employees who witnessed the sudden use of force from the fourth floor of the nearby building, told local news outlet MLive.

"I see the guy get out of the truck, and I'm thinking, 'OK, he's surrendering, he's turning himself in,' and then it turned into a movie."

​Footage shot from different angles shows Nolin being chased by officers in a cruiser before they struck him, tossing him into the air from the force of the hit. After he's down, the cruiser comes to a stop as several officers close in on Nolin.

After being placed in handcuffs, Nolin was transported to a local area hospital to receive treatment for his non-life-threatening injuries, according to MLive.

Nolin was hit with two charges of assault with an intent to murder for his decision to fire at officers, and he is expected to face additional indictments. No charges have yet been filed in connection to the death of Randall.

Nolin, however, is no stranger to law enforcement officials. Since 2007, Nolin has faced misdemeanor charges that include assault, vandalism and driving without a license, according to news station WOOD TV.

Earlier this month, officers with Indiana's Marion County were caught on camera ramming their squad car into a suspect who was trying to flee the scene on a bicycle. Cell phone footage from a bystander captures horrified pedestrians yelling at officers as the suspect lies motionless on the ground.

The man at the center of the the early September altercation was wanted for an outstanding warrant that indicated he'd failed to register as a sex offender, Sputnik previously reported.

Michigan Teenager Nearly Gets Killed By Neighbor After Asking For Directions