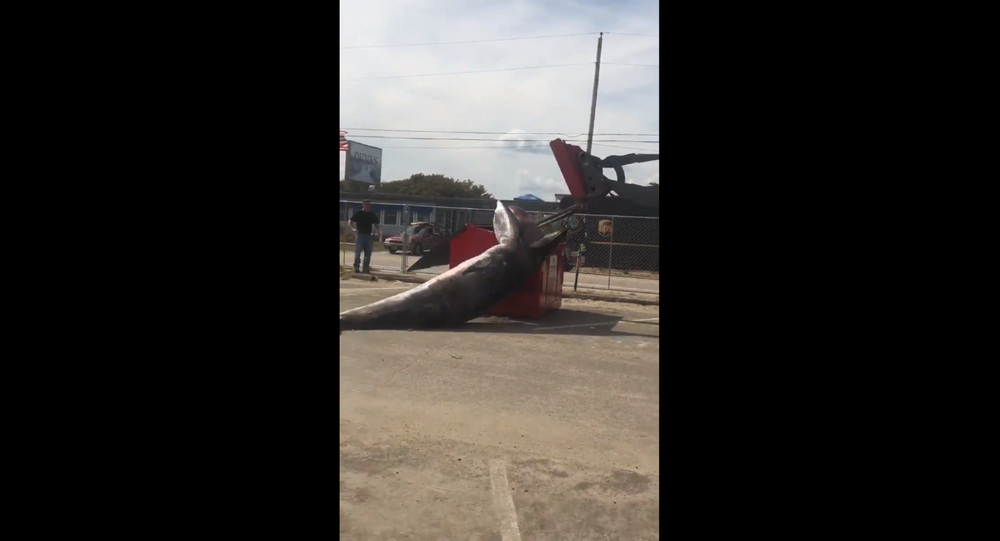 A dead minke whale spent the night in the parking lot of New Hampshire's Jenness State Beach on Monday after authorities tried and failed to get the 16-foot juvenile cetacean's corpse to fit inside a dumpster.

Officials in Rye, New Hampshire, had been attempting to fit the carcass inside the dumpster in order to transport it to a downtown center where marine biologists could investigate the cause of the whale's death, according to the New Hampshire Union Leader.

The whale beaching became something of a public show after Rye authorities brought a front end loader onto the beach to carry the dead whale toward the dumpster officials had prepared. Footage shared on social media by Jason Schreiber, a journalist for the New Hampshire Union Leader, shows the moment that the 2-ton carcass tumbles to the ground as it's being lowered into the bin.

​Ashley Stokes, manager of the Seacoast Science Center's Marine Mammal Rescue Team, told the Union Leader that the mishap occurred because the whale's measurements weren't given to state officials who retrieved the dumpster.

"It is unfortunate, but we had the [Department of Public Works] guys there and they wanted to give it a shot," Stokes said, after noting that officials wanted to see if the whale would fit diagonally in the dumpster.

"Now we know to specify the size to the town and the state. Accidents happen everywhere, not just in marine mammal rescue, and we learn from them."

​According to Stokes, dumpsters tend to be used to transport whales because they help to keep bodily fluids from leaking while whales are being moved elsewhere.

After their attempts backfired, authorities ultimately decided to leave the whale on the grounds until a larger dumpster could be brought on site the following morning. The whale was left covered and surrounded by a barricade Monday.

With the carcass having now been transported, the Seacoast Science Center indicated on Tuesday that once the necropsy is complete, the whale "will be composted at [a] prearranged facility."

The failed attempt has gone viral on social media, with netizens referring to the incident as "Dumpster Whale."

​Though shark bites were found on the body, officials with the Science Center don't believe them to be the cause of death.

Massive Whale Gracefully Jumps Out of Ocean in Australia