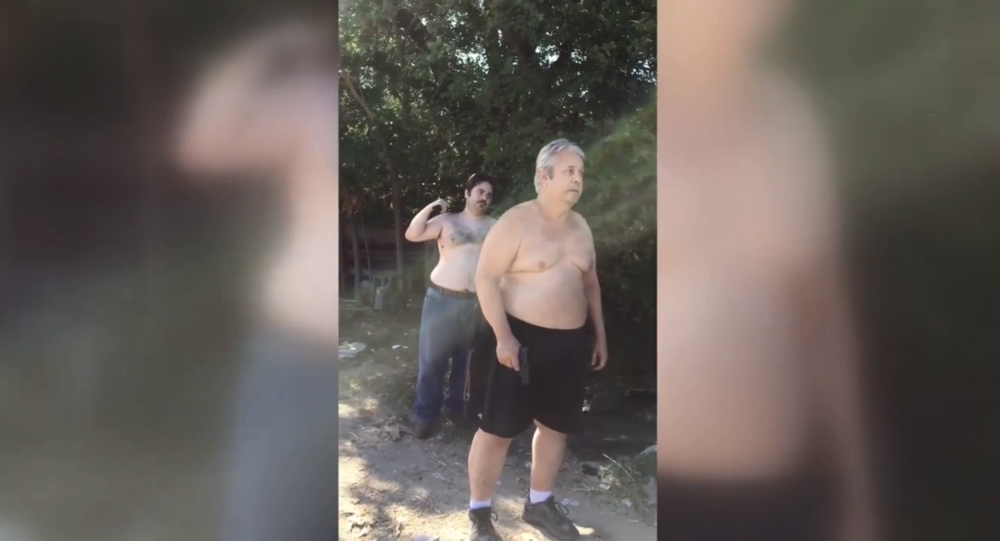 An Abilene, Texas, man was killed earlier this month by his neighbors following a homeowners' dispute. Footage of the incident, which was recorded by the victim's fiancée, was released this week.

The murder, which occurred on September 1, took place after Aaron Howard found himself in a verbal dispute with neighbors John Miller and his son, Michael Miller, over trash that was located in an alleyway behind their homes.

Kara Box, Howard's fiancée, recorded the deadly altercation and later decided to release it to local media outlet KTXS this week in order to reveal just how the early September incident unfolded.

Warning: Footage may not be suitable for some viewers.

Though much of the audio on the recording was bleeped out by the news station due to harsh language, both Millers and Howard can be heard exchanging threats. At one point, John Miller, who is wearing the black shorts, is heard warning Howard, who's sporting the orange shirt, that if he inches any closer to him, he'll kill him. The elder Miller is armed with a handgun, while the younger has a shotgun. Police did indicate that Howard had a baseball bat, however, it is not seen in the recording.

"Hey, you hear he says he's going to kill me?" Howard asks Box as she films the encounter. The frustrated Howard later turns back to the elder Miller and urges him to put the gun down and return home. With neither Miller wanting to leave, Howard's frustration grows as he begins shouting that Miller "pulled a gun in front of [our] children!"

© AFP 2020 / Mandel Ngan
Texas Cop Shoots Man Dead in His Own Apartment, Says She Thought It Was Hers

The elder Miller also cites Texas' Stand Your Ground law, which allows individuals to use lethal force as self-defense as long as they have the right to be present at the location that they're being threatened at, as a means of explaining why he's threatening to use force against Howard. This argument is later shot down by both Box and Howard after they inform him that the alleyway is not considered private property.

Seconds before both the Millers discharge their firearms, Box stands in between the warring parties and confronts John Miller, saying, "You're not going to kill my husband." The video cuts off as a total of four shots are fired by John and Michael.

Speaking to KTXS, Box stressed that it was important for others to see what happened. "People deserve to know what actually happened, and you know they deserve to know John and Michael Miller are murderers," she said.

"[The Millers] deserve to spend [their] lives in prison," Box added.

After law enforcement officials arrived on the scene that day, Howard was transported to a local area hospital, where he was later pronounced dead, Abilene Police Chief Stan Standridge told Texas' Star-Telegram.

In a news conference held earlier this month, Standridge offered more insight on the incident, noting that both Millers initially returned to their home and armed themselves with weapons after the trash dispute "escalated." In response, the baseball bat was retrieved from Howard's home.

"Ultimately, the deceased was shot and killed," Standridge said at the conference.

Since the incident, Box has moved away. Both Millers have been charged with first-degree murder and are both out on a $25,000 bond.