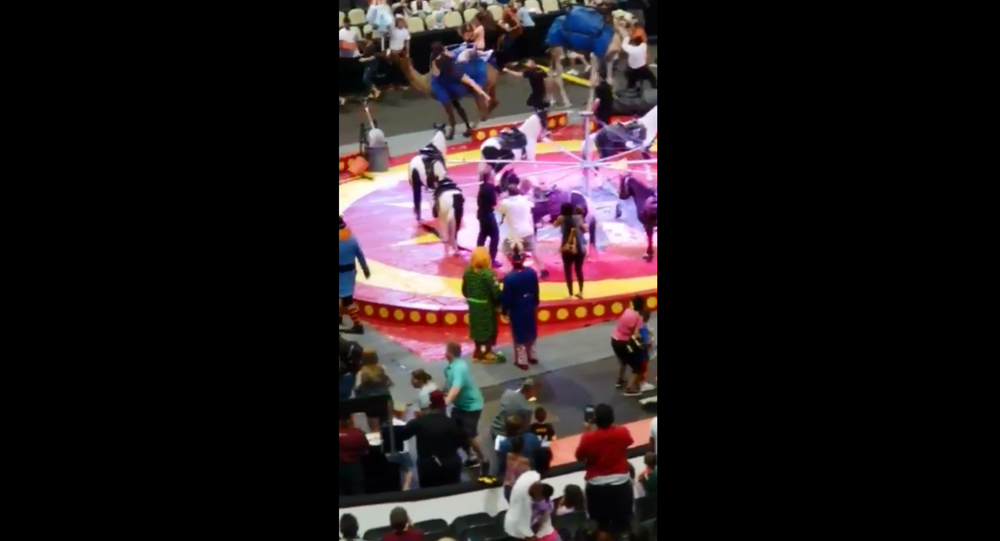 A camel in a Syria Shrine Circus performance at PPG Paints Arena in Pittsburgh, Pennsylvania, on Sunday sent multiple people to the hospital after it suddenly began running around the arena after getting spooked.

A total of seven people, mostly children, were injured during the incident, CBS News reported, noting that the most severe injury was a fractured arm that a child was treated for at a local area hospital.

Footage of the incident, which was captured by attendee Ronald Smith, shows the camel bucking and running through the grounds as a woman dangles from its side. The chase was cut short once circus employees were able to grab ahold of the camel.

Smith told NBC News that he'd brought his girlfriend and her two toddlers to the performance, but decided against bringing the kids down to ride the animals during an intermission. "You just got bad vibes. I didn't feel like that with tigers, but the camels were a little too free," he said.

The camel chaos took place as circus-goers were purchasing rides on tethered camels, ponies and elephants, who were being led by handlers, according to CBS News.

Although officials didn't immediately determine the cause of the animal's behavior, one witness told the outlet in an article published Monday that the camel acted out after a shovel was tossed at its feet. "They were giving camel rides, and camels were walking around calmly. And then a kid threw a shovel at the camel's feet, which startled the camel, and it started to buck," Ruthie Kester said.

Once things calmed down and medical professionals provided treatment to those injured, the circus continued without further issue. Neither the spooked camel nor other animals were injured during the disturbance, and the animals were subsequently cleared after being examined by a veterinarian.

Humane Action Pittsburgh later released a statement on Sunday, stressing that while news of the incident was sad, it wasn't a surprise.

"We are saddened to hear of the incident that took place today at PPG Paints Arena with the Shrine Circus, but not at all surprised. Animal circuses, especially those whom the Syria Shrine Circus subcontracts their animals from, have a long history of animal abuse and public safety violations," the statement reads, before highlighting the circus company's work with organizations who have been cited for animal welfare violations.

Presently, officials from the Pittsburgh Police Department and Shrine Circus are reviewing the incident.