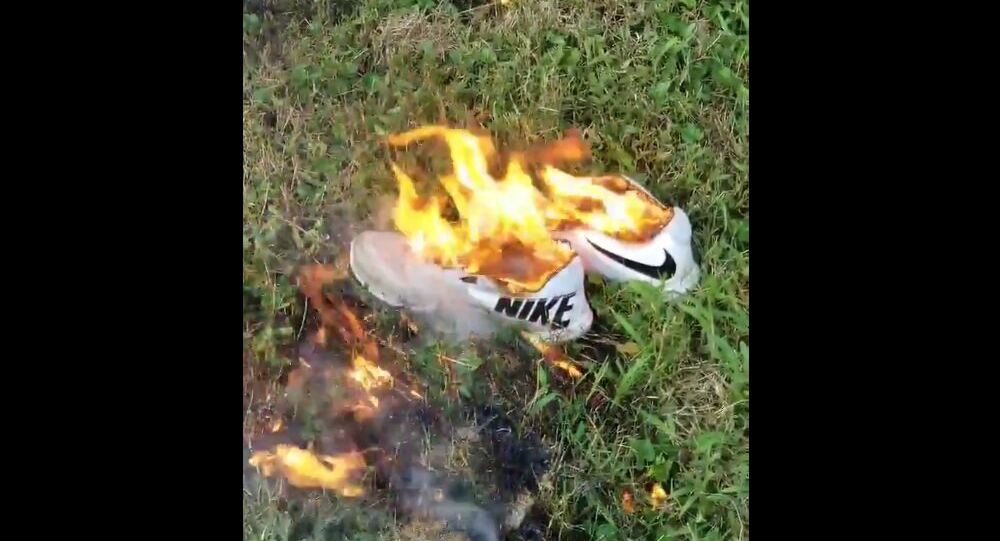 An NFL quarterback, who started the anthem-kneeling controversy in the US two years ago, signed a new deal with Nike that will make him a face of a fresh Nike advertising campaign. A handful of Nike customers took to Twitter to vent their displeasure over the decision.

On Monday, Nike picked Colin Kaepernick, the first NFL player to kneel during the national anthem as a protest against racial injustice, as a new face of its iconic "Just Do It" campaign, which turns 30 this year.

The former San Francisco 49ers quarterback rushed to post a black-and-white close-up of himself featuring the quote, "Believe in something. Even if it means sacrificing everything."

Believe in something, even if it means sacrificing everything. #JustDoIt pic.twitter.com/SRWkMIDdaO

The announcement has prompted many Nike customers to express their outrage by sacrificing their branded gear. Social media outlets have been flooded with calls to boycott the sportswear giant, while some went so far as to burn and cut their Nike clothes and sneakers.

.@Nike Due to your support of C.K. in your coming adds, I as an American can no longer support your company. #boycottNike #IStandForOurFlag pic.twitter.com/5JxSMD8SSO

Our Soundman just cut the Nike swoosh off his socks. Former marine. Get ready @Nike multiply that by the millions. pic.twitter.com/h8kj6RXe7j

Does the defamation of my own clothing affect Nike's equity? No. Am I personally going to help shovel money to a neo-communist? Absolutely not. #NikeBoycott #teamadidas pic.twitter.com/x8COCbNuwV

Some angry internet users have slammed Kaepernick as being "unpatriotic" and "anti-American."

Seriously, Nike? Why pick the most unAmerican person to represent your brand? Shame on you. #BoycottNike

Wow! My entire woredrobe is Nike..NEVER buying @Nike again. You want Kaep and clearly not my money #boycottnike

But even amid social turbulence, there's always time to crack a joke.

So Nikes gonna sign someone who didnt stand for the anthem!!!!!

Here's what I think about that!!!#NikeBoycottpic.twitter.com/qosUHBLHzN

Kaepernick sparked a national debate when he took a knee while the anthem was played before games during the NFL's 2016 season. He later explained that his move was meant to draw attention to shooting deaths of African-Americans by police and other issues.

Some other players soon jumped onboard with Kaepernick, drawing the condemnation of football fans and President Trump in person, encouraging NFL owners to fire anthem protesters.

In May, the NFL adopted a fresh national anthem policy requiring all players to stand during the anthem or remain in the locker room until the ceremony was over.

EU Launches Probe Into Nike, Universal Studios in Latest Standoff With US Giants