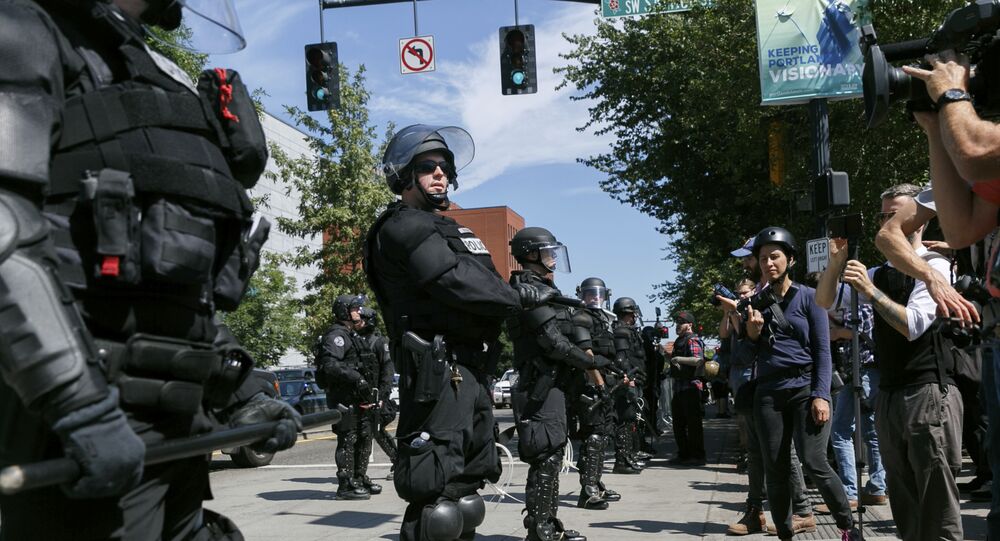 Founded by white nationalist Joey Gibson, the so-called Patriot Prayer group co-hosted the march alongside, a Washington state group calling themselves the Three Percenters, members of which advocate for the right to carry weapons and firearms in every walk of life.

As a candidate Gibson drew about 2 percent of the vote in a recent Washington US Senate primary. The white supremacist asserted that  marchers were demonstrating against what he termed "violence on the far left," according to the Seattle Times.

Who is this guy? Do you work with him? #Seattle #DefendSEA pic.twitter.com/3X3fUTO508

Hundreds of counter-protesters converged across the street from where the rally took place. A heavy police presence, many on bicycles, kept the two sides apart. The two groups were separated by metal barricades along Fourth Avenue in Seattle.

By the end of the day, three adult men were reported to have been arrested for assault following small occurrences of violence.

© REUTERS / Alejandro Alvarez/News2Share
Trump Condemns KKK, Neo-Nazis, White Supremacists as 'Criminals and Thugs,' Says 'Racism is Evil'
According to media reports, at one point, a scuffle broke out on the corner of Cherry Street and Fourth Avenue. A man dressed in black, with a black bandanna, was taken away in handcuffs. Another man in a red Donald Trump hat was reported by some to have been kneeling in the street, bleeding from the forehead.

The so-called Liberty or Death rally reportedly drew about 150. The counter-protest, led by Organized Workers for Labor Solidarity, Radical Women and the Freedom Socialist Party, drew two to three times as many, The Seattle Times reported. One of the counter-protesters suggested that the neo-Nazi marchers were a "loose band of [Patriot Prayer members]," cited by the Seattle Times

Not a huge turn out for the Proud Boys/Patriot Prayer folks. Older crowd. More folks on the anti-rally side, younger and much more diverse. Not surprising. Also, Seattle, as far as I can tell, was largely indifferent to this protest. Many more people at Hempfest:) pic.twitter.com/Dco3iH3aW4

© AFP 2021 / Robert MacPherson
Sessions Vows to Prosecute Makers of Undetectable 3D Printed Guns
Following a ever-growing list of school shootings and mass murders at the hands of gun-wielding Americans, the US has seen a wave school walk-outs against gun violence, as well as calls for stricter firearms controls. Recent protests were ignited by another mass shooting, this time at Stoneman Douglas High School. On May 18, a 17-year-old gunman killed 10 and wounded 10 others at the Santa Fe, Texas, school.

In the wake of the Florida shooting, US President Donald Trump said teachers should be authorized to carry weapons and that stricter background checks must be enforced for gun buyers.

The Second Amendment of the US Constitution guarantees the right of US citizens to keep and bear arms, although the interpretation of the document is open to an increasingly fierce national debate.

READ MORE: When Free Speech 'Crosses the Line': Does US Need to Tackle White Supremacists?