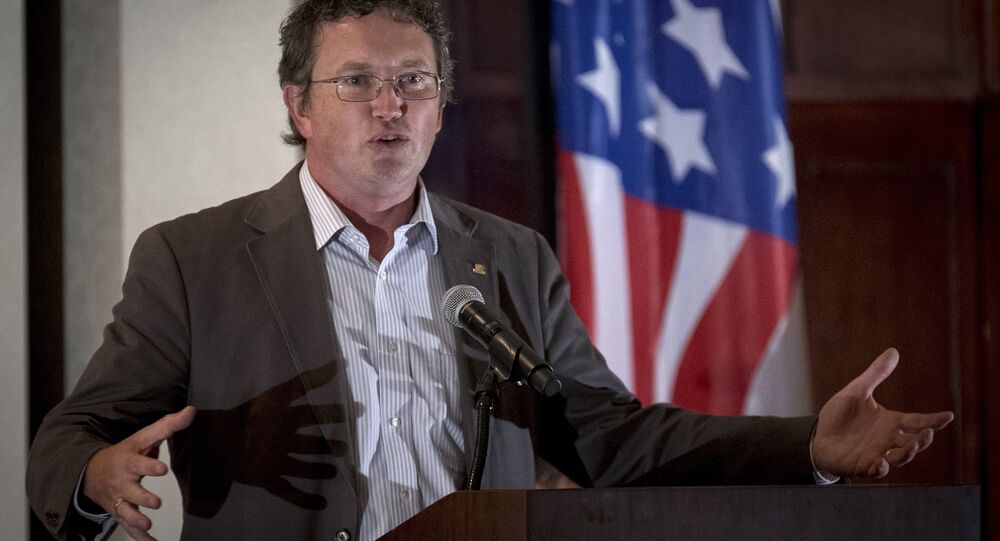 Representative Thomas Massie (R-KY) penned a scathing opinion piece on Thursday calling out Democrats and the “anti-Trump” media for their hysterical and xenophobic approach to Russia.

The op-ed, entitled "Russia Hysteria Undercuts Our Values, Impedes Relations," argues that hysteria over Russia "is yet another example of the disconnect between Beltway talking heads and the American people. Hard-working Americans — including constituents in my Kentucky district — care about jobs, paying the bills, putting food on the table and leaving this country a better place for their children."

The "alleged ‘vast Russian conspiracy,'" Massie says, is "simply not a concern of normal Americans."

Massie notes how the only so-called proof proffered to the public on Russiagate is special counsel Robert Mueller's indictment of 13 Russian nationals (accused of acting as internet trolls and stealing identities to do so) and 12 Russian intelligence officers (alleged to have hacked the Democratic National Committee in 2016).

Indictments, of course, are not conclusive — they are allegations. As the saying goes, a good prosecutor can could get an indictment against a ham sandwich.

Massie argues that's basically what was done to Russian national Mariia Butina, accused of acting as an unregistered foreign agent in the US. "Russophobic rhetoric seems to have turned into a witch hunt, as President Trump calls it," Massie said.

The evidence against Butina is "thin on substance," he writes. Her crime? That she "genuinely hoped for improved Russia-US relations."

"Unlike many accused of violent crimes, Butina (who has not been accused of harming anyone) was denied bail, and is now reportedly being held in solitary confinement in federal prison until her trial," Massie wrote.

Greater threats than that of Russia? "Porous borders," the national debt and "radical Islamic terrorism." While it seems true that terrorism is a more pressing threat to the US than Russia, that one also is often overblown.

A 2016 study by the Cato Institute in 2016 found that about 3,024 Americans died from terrorist attacks conducted by foreign-born people since 1975, which is, of course, greatly inflated by the attacks on the World Trade Center in 2001, which claimed 2,983 lives some 17 years ago. After that attack, the United States ramped up its national security sector, in part by creating the Department of Homeland Security.

Oddly, in defense of Massie's colleague Representative Dana Rohrabacher (R-CA), who is often criticized for "seeking better relations with Russia," the former writes that the latter "was once on the front lines with the mujahedeen when they fought the Soviets."

Under the program Operation Cyclone (1979 to 1989), America trained and armed the mujahedeen before and after the Soviet intervention in Afghanistan in support of the socialist government. President Jimmy Carter's National Security Adviser Zbigniew Brzezinski once said he wanted to give the Soviets a situation like the one the US faced in Vietnam.

The US wanted to prolong the insurgency to suck "the Soviets into a Vietnamese quagmire," a representative of the Department of Defense, Walter B. Slocombe, said. "Well, the whole idea was that if the Soviets decided to strike at this tar baby [Afghanistan], we had every interest in making sure that they got stuck."

The CIA also drafted textbooks for school children preaching jihadism, which are still popping up in Afghanistan despite efforts since the US' 2001 invasion to destroy them.

Massie writes that a "new xenophobic isolationism" is sweeping parts of the US. Maybe it's not as new as some would think.

Russiagate Degenerates Into a War Against Dissent and Free Speech