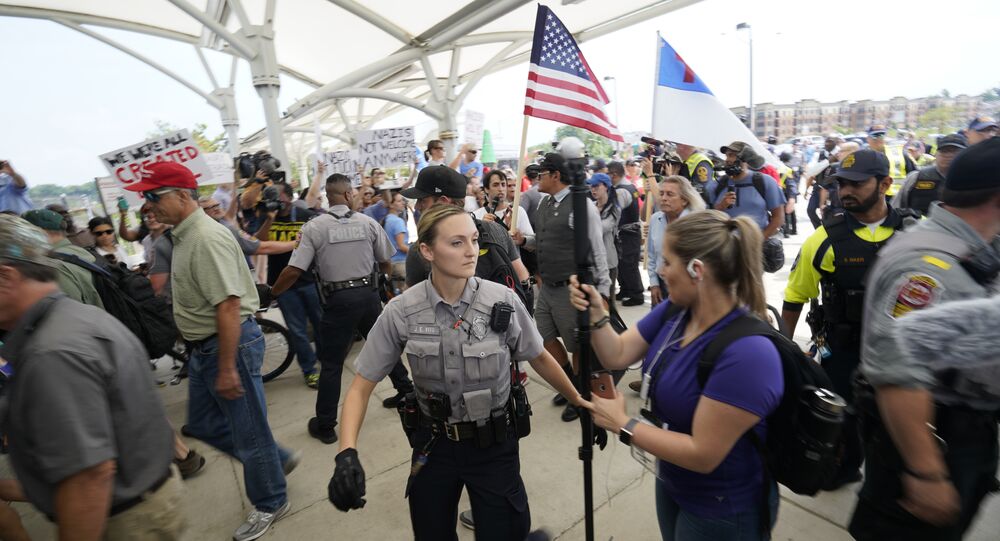 Washington, DC’s, Metro (WMATA) authorities are under fire: this time, not because the metro is actually on fire, but for the “special” treatment they afforded a handful of neo-fascist protesters on taxpayers’ dime.

Metro gave special accomodation to Unite the Right 2.0 demonstrators who came to DC on Sunday to commemorate the one-year anniversary of their first deadly protest in Charlottesville, Virginia. Both the initial Unite the Right and its second iteration were organized by Jason Kessler.

Ahead of the DC rally, rumors began circulating that Metro would provide the far right demonstrators with their own private metro car, Sputnik News reported. The largest Metro union, ATU Local 689, refused to provide transport for the group.

First, DC authorities claimed that the plan wasn't finalized and was still up for debate. Then, they promised it wouldn't happen in the face of backlash.

But it did — Metro closed a gate to the public at the Northern Virginia station where about two dozen far-right protesters gathered to depart for DC. They were then escorted by police into private train cars for their ride into the nation's capital and escorted out the same way.

ATU Local 689 Communications Coordinator David Stephen tells Sputnik News that Metro lied. He also noted that DC Council Member and Metro Board Chairman Jack Evans publicly promised that the city would not give the far-right demonstrators any private cars. "Metro will not be providing a special train or special car for anyone next Sunday," Evans said, according to The Washington Post.

"Metro will not be having a separate train, or a separate car, or anything separate for anybody at this event that's going to happen next Sunday," he told NBC Washington.

"To be absolutely clear, Metro is not preparing a ‘special train' for the private use of any group," Metro said in a statement.

To say that Metro was "dishonest" would be using a "nice word," Stephen said. "We took WMATA at their word. WMATA is the one that lied to the riding public."

"Despite complaints by WMATA Union and statement to the contrary, only Jason [Kessler], his supporters, police and press are in the train on its way to DC," tweeted News2Share reporter Ford Fischer from the train.

"The Kessler group traveled from Vienna to Foggy [Bottom] on a regularly scheduled train, together with other passengers, media and law enforcement," read a statement from Metro spokesperson Sherri Ly.

However, videos posted from inside the train show police blocking the entrances to train cars as they stopped along the way.

​Over their heads, the signs on the train cars which usually display the time and destination of the car instead read merely "special."

"What this says is that they are willing to go out of their way at taxpayer expense to protect a hate group, and that is far beyond unacceptable," Stephen said.

Now, the union is calling for WMATA General Manager Paul Wiedefeld in addition to his Executive Leadership Team to resign or to be fired.

Wiedefeld's lies about transporting the Unite the Right 2.0 rally-goers came "the same way he has been lying to this union for the last two years," the union tweeted.

While the union is clearly upset, DC residents, and even some council members, are no less furious.

DC Mayor Muriel Bowser condoned the move, however, arguing that it "led to a relatively peaceful day."

"To take a hate group and protect them — and that's another part of the narrative, is that they say that the additional protection was to protect the public — that's another lie. This was about protecting them," Stephen told Sputnik News.

Members of the union are "outraged," he said, adding that the accommodation is unprecedented in the District, which is no stranger to frequent First Amendment activity.

"Never — for the Women's March, for Black Lives Matter, for the other side — even for the inauguration or for the March for Life or for things like that, it doesn't matter what side of the political spectrum you're on, whether it's left or right — we've never done anything like this before," he said.