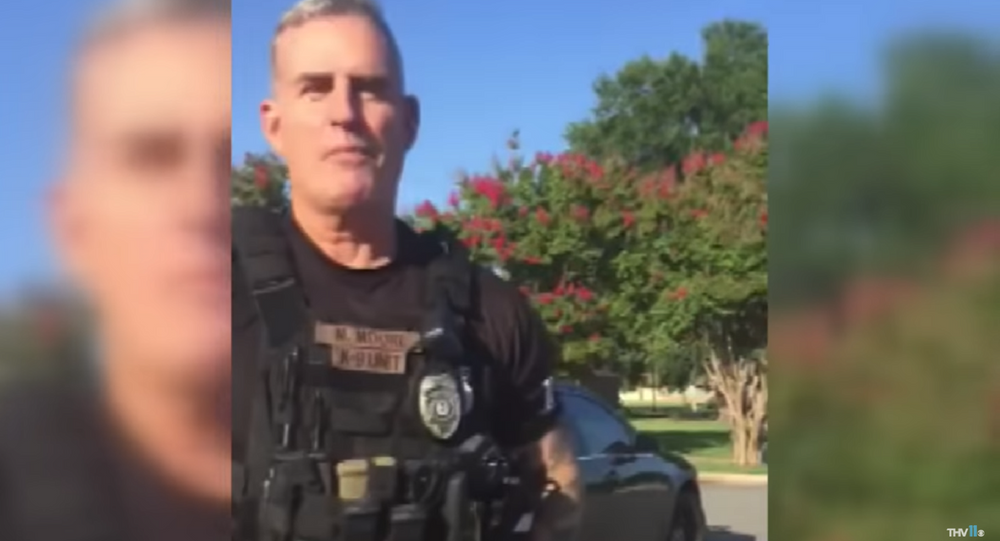 An Arkansas police officer caught on video telling a group of black men they “don’t belong in my city” has been sacked.

In the video published on YouTube Wednesday, Officer Mike Moore of England, Arkansas, approaches the group of black men, first shaking one's hand. One of the men says that the cop was "following us everywhere."

"You know why? Because you don't belong in my city," the officer says.

"We're from here," one of the men, Demarcus Bunch, replies. Bunch's uncle is reportedly employed by the very same police department.

"But you understand, I know who my people are, right; who belongs here and who doesn't? We've got gang wars going on; we got all kinds of stuff," Moore says. "And I come from the big city, where this stuff's small."

One of the men presses the officer on his assertion that they don't belong there. Moore replies: "Can I say something though? Ok. You don't — I have never seen you here before, and I know almost everybody here."

"Well, good for you. My name's Mike Moore, ok? I'm not from here," the officer says, before ordering the men to step away from his vehicle as he lets his K-9 dog out.

The men wait around for a while, taken aback by the officer's statements. "He ain't even from England. We from England," one of them says.

Another wonders how the cop got probable cause to do a K-9 search. But the officer never comes back — he simply drives away.

Bunch provided a copy of the video, which was filmed on July 21, to the police department, but after he didn't hear back for weeks, he decided to just publish it on Facebook.

"We wanted to give the chief the opportunity to perform her investigation," Bunch's cousin, who was with him at the time, told THV11. "So we held the video close to our chest and waited for her to provide a response."

Lonoke County Sheriff John Staley told THV11 that Moore had previously been fired from his office, but not over a "race issue; it is a personality issue." Moore apparently went on to work for the England Police Department, from which he was fired after the video surfaced.

"He was terminated from Lonoke County Sheriff's Office because he couldn't get along with other officers and other agencies," the sheriff added.

White US Cop Passed Over for Promotion Files Discrimination Complaint