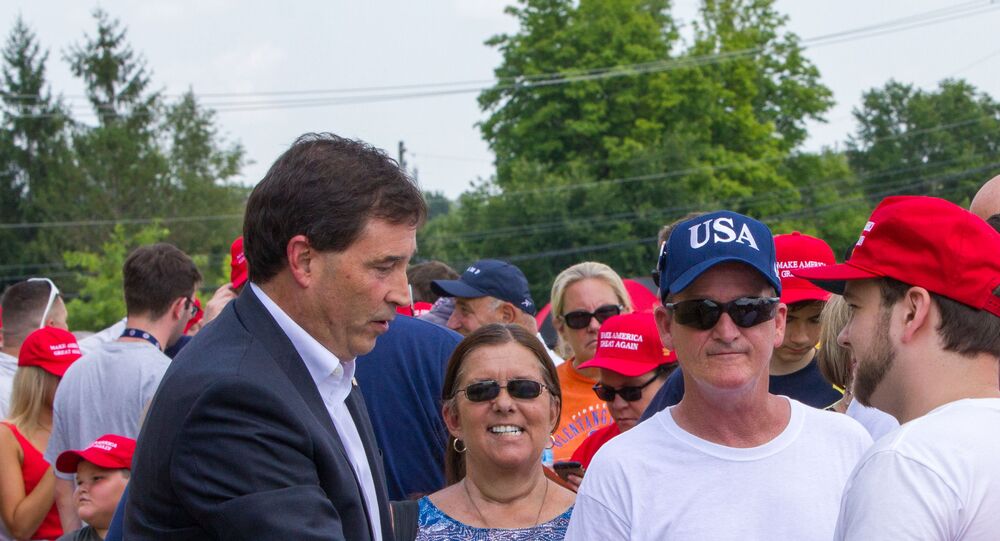 MOSCOW (Sputnik) - Republican candidate Troy Balderson is leading over his Democratic opponent Danny O'Connor in the Ohio special election in the 12th Congressional District for a seat in the US House of Representatives by a mere 0.9 percent, or 1,754 votes, according to the most recent vote count published by CNN.

Special elections for seats in the House of Representatives or Senate are held if a politician prematurely leaves office. Special elections can be held on individual days, but some states tend to combine special elections with other votes to save costs. The Ohio vote was called after US Rep. Pat Tiberi resigned in January.

According to data published by the CNN broadcaster, Ohio State Sen. Balderson has 50.2 percent of the vote, while O'Connor lags slightly behind with 49.3 percent.

The Ohio state secretary said that there were 8,483 early and absentee ballots left to count.

The media noted that US law required that such ballots be counted only 11 days after the election, meaning the winner may be announced no earlier than a few weeks from now. If the difference between candidates is less than 0.5 percent, the authorities will have to recount and recheck the votes.

Meanwhile, Balderson has already announced his victory and thanked his supports on Twitter. US President Donald Trump has also congratulated him.

When I decided to go to Ohio for Troy Balderson, he was down in early voting 64 to 36. That was not good. After my speech on Saturday night, there was a big turn for the better. Now Troy wins a great victory during a very tough time of the year for voting. He will win BIG in Nov.

​In turn, O'Connor has said that the race results were "impossible to predict" and noted that a potential recount would take a lot of time and money.

The broadcaster went on to recall that over the past 35 years, only Republicans have won the election for this district, meaning that the closeness of the race was a testament the Republicans' poor choice of strategy, which in turn could lead to unpleasant consequences for the party in the midterm elections this fall.

On November 6, voters will choose who will fill one-third of the Senate, all 435 seats in the House of Representatives and governors' seats of 36 states. Currently, primary elections, during which Democratic and Republican candidates are determined, are being conducted across the country.

The outcome of the midterm elections is expected to have a significant impact on the country's political future. If the Democrats take control in at least one of the US Congress' chambers, it will make it more difficult for the Republicans to pass any bills, appoint future candidates for cabinet positions and heads of various federal agencies.