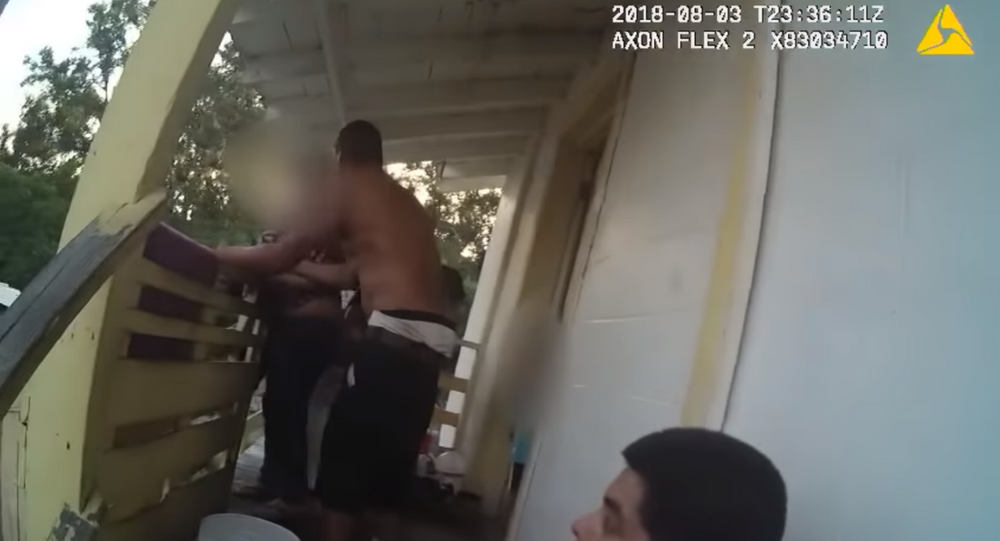 The incident took place after Deputy Brandon Watson, hired in 2015, responded to a report of domestic violence between 29-year-old Emmanuel Alquisiras and his partner on Friday.

Footage released by the department begins as Watson approaches two men sitting on the stairs, who later turn out to be Alquisiras and a friend. Throughout their conversation, both parties are uncooperative and inform Watson that they know nothing about any domestic violence incident. Alquisiras is the shirtless man seen sitting at the top of the stairs.

​It isn't until Alquisiras' partner comes outside and hands Watson her cellphone that the officer figures out that his suspect is one of the men sitting on the stairs. The third party on the phone also informs Watson that the partner had been threatened with a knife.

Later, an argument between Alquisiras and his partner breaks out and becomes violent, as Alquisiras shoves the woman to the side. Watson, reacting to the situation, deploys his stun gun.

After a few seconds, Alquisiras drops to the ground. However, he is then tased multiple times as he refuses to follow Watson's orders to place his hands behind his back. The situation escalates even further when Alquisiras decides to grab the stun gun.

Rather than complying, Alquisiras responds by telling Watson to shoot him. "Shoot me. Shoot me. I want to die in front of my babies and in front of my wife," he says, before Watson instructs him to yet again place his hands behind his back.

Once Alquisiras directs his attention back to Watson, who's just told the children to go back inside, he tells the deputy that he can't believe he tased him in front of his kids.

"I didn't want to do this in front of the kids, man," Watson responds. "You forced my hand."

Moments after telling Alquisiras that he has no intention of shooting him, Watson tases him one more time before discharging his firearm several times. Although the bodycam footage does not show the struggle, Watson can be heard telling Alquisiras to "stop" multiple times. In a Saturday press release, the sheriff's office explained that Watson ultimately deployed his firearm after Alquisiras suddenly moved to grab his stun gun.

The remainder of the footage shows Alquisiras' brother come onto the scene and begin to yell at the officer for firing his gun.

"I… I have rescue on the way," Watson tells the relative while he's standing several feet away from the home. "He pulled my taser out and was fighting me. I didn't want to do it, dammit. He forced my hand. I don't want to do this."

By the time paramedics arrived on the scene, Alquisiras was dead.

"This is a tragic incident all the way around," Sheriff Mike Chitwood told Florida news station WESH. "You have children who grew up in a home, clearly with domestic violence, and then they watch the father figure get killed by police."

"Tell me what good comes out of that? Nothing," he added.

The Florida Department of Law Enforcement has launched an investigation into the incident. Watson is currently on administrative leave, which is standard procedure following an officer-involved shooting, according to the sheriff's office.