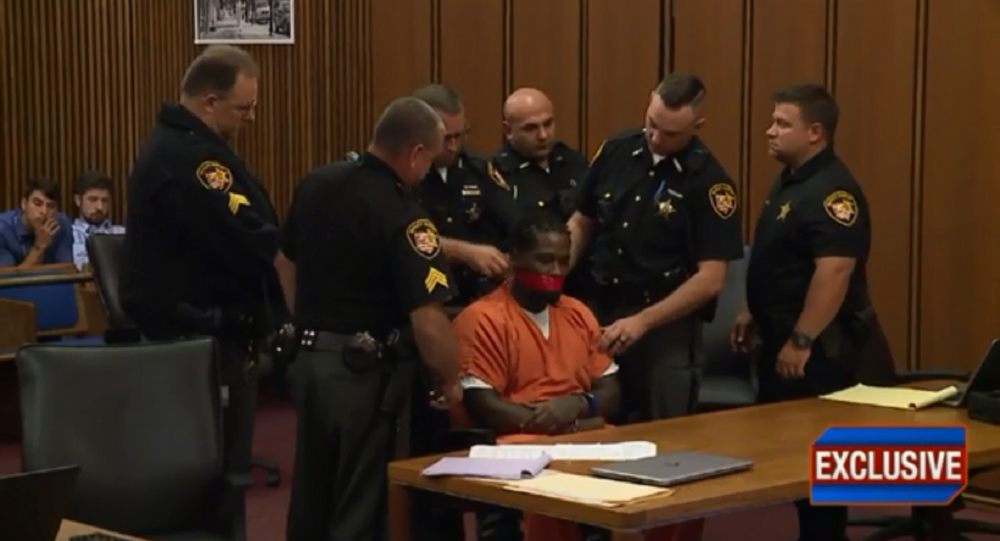 A Cleveland judge ordered a man’s mouth to be covered with duct tape during his sentencing hearing on Tuesday.

Franklyn Williams, 32, was convicted on charges related to three armed robberies but evidently didn't think he had received a fair trial, so he tried to speak with the judge.

"You're trying to take my life, and you're not letting me tell you what's going on," the man said. He was later sentenced to 24 years behind bars.

Williams was speaking about his jail cell being raided and having his possessions removed, complaining that he had only met his lawyer "the other day."

Cuyahoga County Common Pleas Court Judge John Russo said, "Mr. Williams, I'm the judge in the matter. Shut your mouth, and I will tell you when you can talk. You got it?"

"No, it doesn't," Williams replied.

Williams complained that his trial had been unfair, since he was previously convicted last year in a trial for which he wasn't present. Prosecutors alleged at the time that he had cut off his ankle bracelet and fled to Nebraska.

The latest sentence is the result of Williams' second trial in the case. In the first, he pleaded guilty to a lesser sentence of 14 years but was allowed to appeal it after it was found the court misinformed him about when he would become eligible for release. Now he's been sentenced to an additional 10.

Eventually, Russo ordered Williams' mouth to be taped shut. Six deputies surrounded him, one shouting, "Mr. Williams I want to make it real clear. If you spit on, attempt to bite or injure any of my deputies, you're gonna have a bad day."

"We cannot regard this as normal. It is humiliating. It doesn't just deprive this person of the opportunity to speak before his life is taken away, it steals his dignity," ACLU of Ohio staff attorney Elizabeth Bonham said. "Everything about this is wrong."