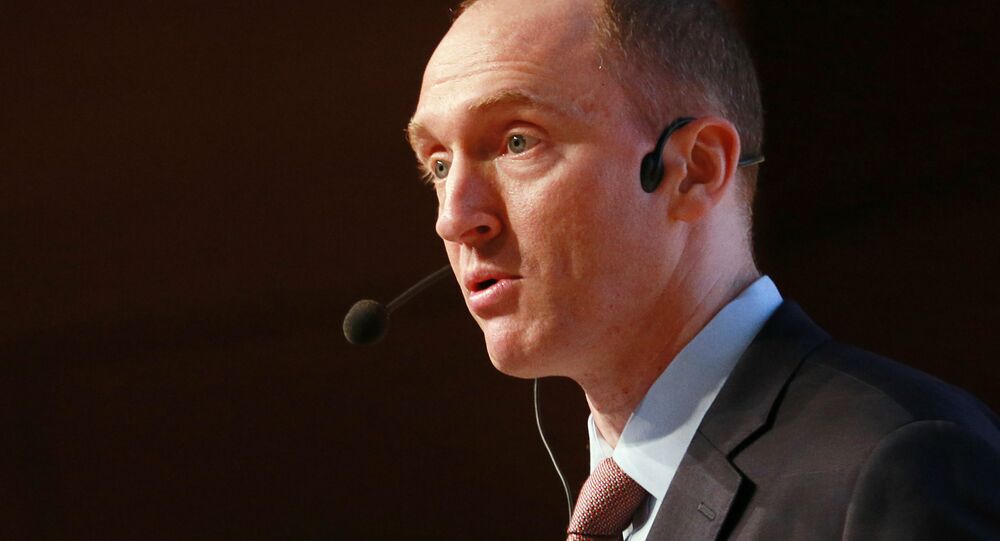 The Department of Justice released Saturday documents related to the surveillance of former Trump presidential campaign adviser Carter Page as part of a Russiagate investigation, US media reported.

According to The New York Times, the heavily redacted application documents — 412 pages, including an initial application and several applications to renew the surveillance — indicate that the FBI "believes Page has been the subject of targeted recruitment by the Russian government… to undermine and influence the outcome of the 2016 US presidential election in violation of US criminal law," the surveillance application said.

The documents released include applications and renewal warrants filed in 2017 after Donald Trump took office. Carter Page has denied being an agent of the Russian government and has not been charged with any crime.

© AP Photo / Pavel Golovkin
Ex-Trump Campaign Adviser Carter Page: US Government ‘Abused’ Its Power By Spying on Me
However, the report released said "the FBI believes that the Russian Government's efforts are being coordinated with Page and perhaps other individuals," adding that Carter page "has established relationships with Russian Government officials, including Russian intelligence officers."

In May, The New York Times reported that the FBI used informants to gather information from Donald Trump's presidential campaign staff only after they got evidence of allegedly suspicious contacts connected to Russia.

However, Donald Trump said earlier that hat FBI planted a mole in his entourage long before the investigation into the campaign's alleged ties to Moscow began.

The informant, who is reportedly a US professor teaching in the United Kingdom, contacted several members of the campaign, including former aides Carter Page and George Papadopoulos as well as former Trump's National Security Adviser Michael Flynn.

Trump lawyer Rudy Giuliani said earlier that other Trump lawyers had been told that there were two informants inside the Trump campaign and that a report in the New York Times earlier corroborated the information.

© Flickr / Microsiervos Geek Crew
Mueller's Team Probes Encrypted Phone Messages of Russiagate Witnesses - Reports
Since Donald Trump won the 2016 presidential election, the US authorities have been investigating on various levels the allegations about his campaign team's possible collusion with Russia, and have claimed that Moscow allegedly meddled in the election process to help Trump win against then-Democratic candidate Hillary Clinton.

Special Counsel Robert Mueller is currently leading a probe into Russia's alleged meddling in the 2016 US presidential election.

Russian officials have repeatedly stressed that Moscow has never tampered with US election and stressed that no accusations against Russia have been substantiated.