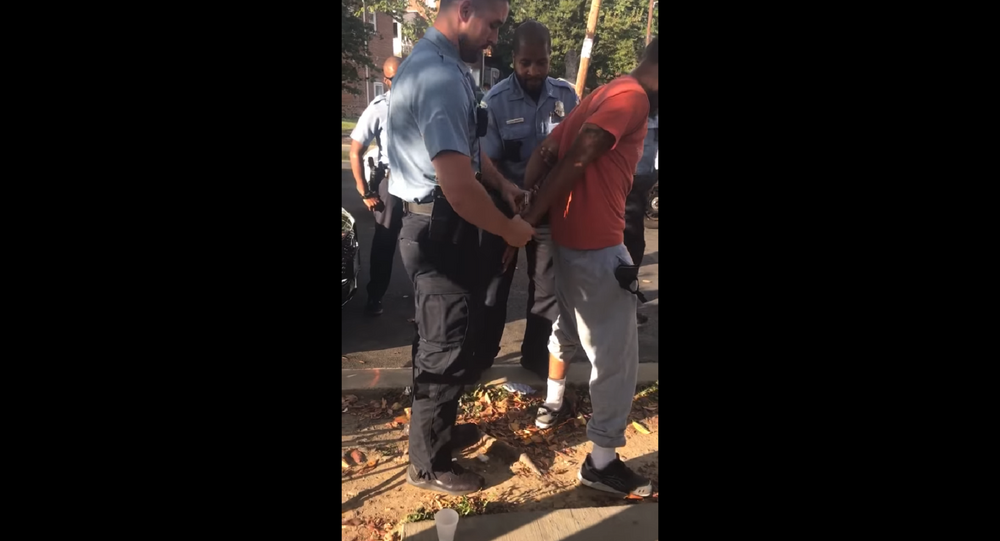 The ACLU of Washington, DC, sued Metropolitan Police Department (MPD) officer Sean Lojacono over a stop and frisk in September in which he can be seen on video grabbing a man’s genitals and jamming his finger between his buttocks.

The search was "unconstitutional and exceedingly invasive," the ACLU stated, adding that the act was undertaken "without a warrant, reasonable suspicion, or probable cause."

The man, MB Cottingham, 39, says he has "never been so humiliated" in his life.

"It's bad enough that members of my community are stopped and frisked by the police all the time. I've been frisked many times and even beaten by police. But this officer treated me like I'm not even a human being," he added.

According to the ACLU, Lojacono asked Cottingham what was in his sock. Cottingham pulled out a small bag of marijuana, which is legal to possess in the District of Columbia, and offered to let the officer pat him down to "avoid a confrontation."

Video of the incident begins with the pat-down. After the officer reaches up to the Cottingham's genitals from behind, he stumbles in shock. "Why are you grabbing my s**t? Come on man. Hold, you just stuck your finger in my a**," he protests.

The officer then handcuffs Cottingham. After doing it again, the officer tells him, "I'm outside your pants, relax."

Lojacono corrects Cottingham after he said he was "demasculating" him, telling Cottingham that he means "emasculate."

"This shocking and unjustified invasion of Mr. Cottingham's privacy was a violation of his constitutional rights and basic dignity," ACLU-DC Senior Staff Attorney Scott Michelman said in the statement. "When a routine frisk turns into a search this invasive, the officer is not pursuing a legitimate law enforcement purpose but simply degrading someone and asserting his own power."

Even MPD Chief Peter Newsham, who is known for expressing frustration over, and allegedly violating, constitutional standards, said "it looked like it was an inappropriate touching by the officer."

The ACLU says that Cottingham was unable to work for an entire month following the incident, suffering from depression and anxiety as well as "discomfort in the areas that were probed and grabbed."

In May, ACLU-DC sued DC Mayor Muriel Bowser's office over MPD's failure to collect comprehensive data on stops and frisks as required by the 2016 Neighborhood Engagement Achieves Results (NEAR) Act.

"What happened to Mr. Cottingham is part of a larger pattern of aggressive stops and frisks that we hear about regularly from community members," Michelman said, adding that the MPD's noncompliance with the NEAR Act "denies the Council and the public the information needed to facilitate meaningful oversight over police practices" resulting in "abusive" searches such as the one endured by Cottingham.

In June, the ACLU of DC filed suit against the city, the MPD and Chief Newsham over police conduct during protests against the inauguration of US President Donald Trump after 230 people were arrested en masse on January 20, 2017.

The charge of invasive searches refers to the "unlawful manual rectal probing" of activist Milo Gonzalez and photojournalist Shay Horse while they were detained at a police academy in the District because there wasn't enough room in the jails.