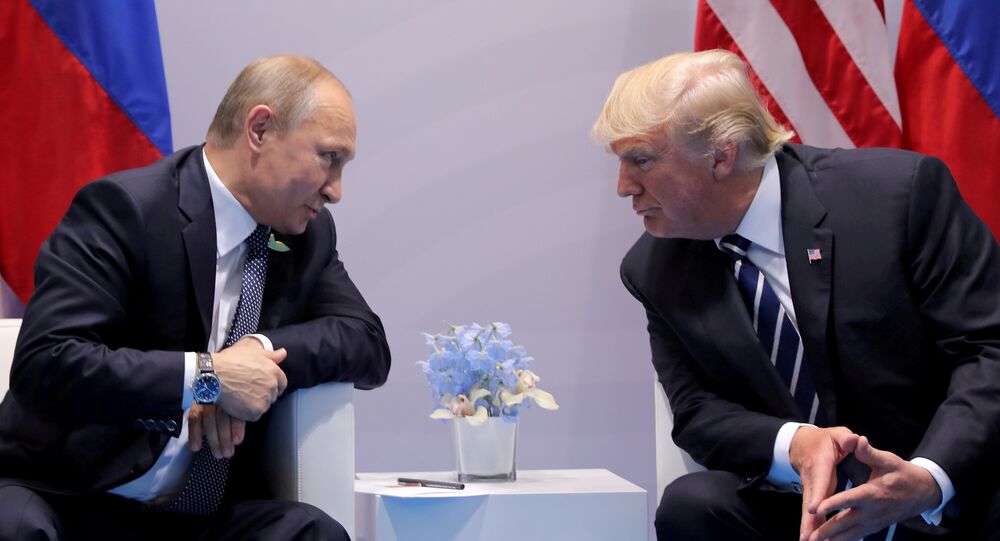 Ahead of President Donald Trump’s upcoming meeting with his Russian counterpart Vladimir Putin, Democrats and Republicans in the United States have shared worries about the possibility of a cozy meeting between the two, Reuters wrote.

After Trump called  Putin a “competitor” and “not my enemy” on Thursday, lawmakers from both parties have voiced stern warnings to Trump not to go soft on the Russian leader when two presidents sit down together in Helsinki on Monday.

“Putin is not America’s friend, nor merely a competitor. Putin is America’s enemy — not because we wish it so, but because he has chosen to be,” Republican Senator John McCain said is a statement.

“It is up to President Trump to hold Putin accountable for his actions during the meeting in Helsinki. Failure to do so would be a serious indictment of his stewardship of American leadership in the world,” he added.

© AP Photo / Frank Augstein
UK Prime Minister May Welcomes Putin-Trump Summit - Reports
While Donald Trump sees his Monday meeting with Putin as a chance to ease bilateral tensions, legislators on Capitol Hill fear that Trump will fail to put hard questions to Putin over Russia’s alleged meddling in the 2016 US presidential election and will go soft on the Russian leader to the detriment of America’s allies in Europe, Reuters wrote.

“Easiest” Part of the Trip

Concerns about Donald Trump’s commitment to America’s European  allies  cast a long shadow over the NATO summit that closed up shop in Brussels on Thursday.

Trump headed for Europe on a confrontational note after he  repeatedly demanded in recent days that NATO countries ramp up their defense spending and stop freeloading on the US for security.

Trump clashed with German Chancellor Angela Merkel on Wednesday, saying that Germany was “totally controlled by Russia” because it imports large amounts of Russian natural gas.

He also angered US allies by telling reporters in Brussels that he expected his upcoming meeting with Vladimir Putin to be “the easiest” part of his week-long European trip.

The two-day NATO summit, which kicked off in Brussels on Wednesday, brought together the heads of state and heads of government of the 29-nation military alliance.

The discussions had been clouded well in advance by Washington’s demand for partners’ compliance with the 2-percent spending target and the recent disagreements demonstrated at the G7 summit in Quebec, Canada.