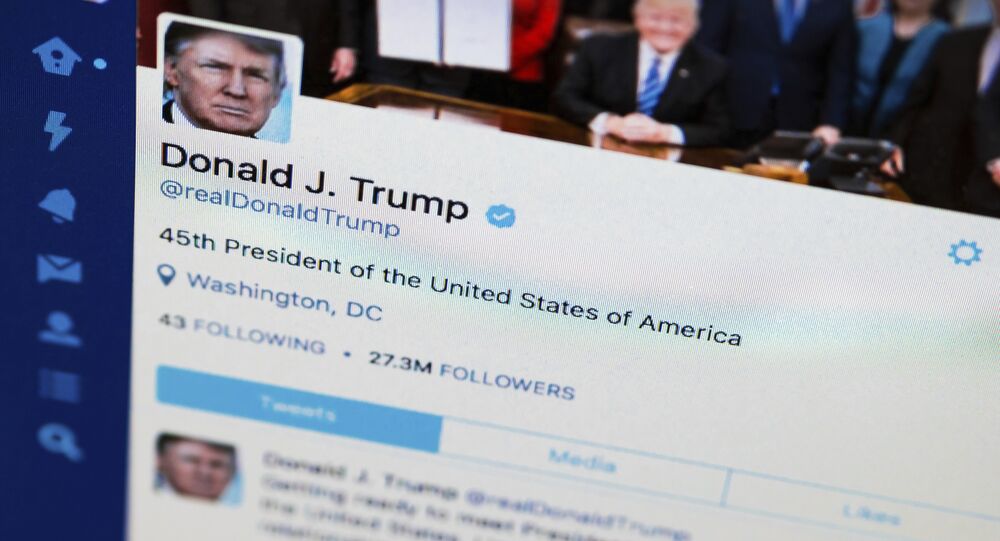 US President Donald Trump - currently in Singapore - continued his personal tweeting attack against Canadian Prime Minister Justin Trudeau, with the assertion that "Justin acts hurt when called out!"

Donald Trump, who is in Singapore for the historic meeting with North Korean leader Kim Jong-un, tweeted Monday that "Fair Trade is now to be called Fool Trade if it is not Reciprocal".

Trump declared that the trading policy of foreign countries with the US is unfair, claiming that there is an "$800 Billion Trade Deficit," a figure that is as yet unsubstantiated by expert research.

© AP Photo / Jesco Denzel
Summit's Final Communique: G7 or G6 and Trump?
US President Donald Trump said Saturday he had instructed US House of Representatives not to endorse the final communique of the G7 summit due to Justin Trudeau's "false statements at his news conference," who called US metal tariffs "insulting" and announced retaliatory measures. The Canadian Prime Minister's office, however, noted that Justin Trudeau said nothing he has not said before either in public, or in private conversations with Donald Trump.

Sorry, we cannot let our friends, or enemies, take advantage of us on Trade anymore. We must put the American worker first!

Aside from making petulant complaints about Trudeau, Trump tweeted polemics against some of Washington's closest NATO allies over issues loosely connected to the US trade deficit, following a confusing G7 meeting in Canada.

© REUTERS / Adam Scotti/Prime Minister's Office/Handout via REUTERS
Trump's G7 Communique U-Turn Destroys Partners' Trust – German Foreign Minister
On Sunday, German Chancellor Angela Merkel said that the G7 meeting in Canada was complicated and disappointing. "I would not dismiss the G7 format. Yes, this time it was difficult, it was disappointing, but it does not end this way," Merkel told ARD broadcaster.

Earlier in the day, German Foreign Minister Heiko Maas said that Donald Trump’s decision to revoke his endorsement of the Group of Seven communique via a tweet has undercut trust of US partners and made it even more vital for Europe to stand united.