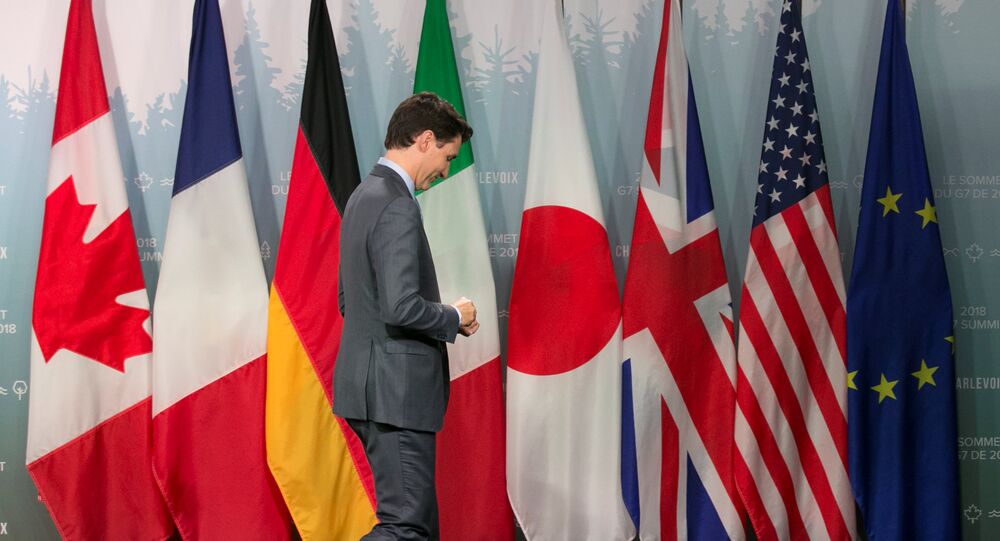 MOSCOW (Sputnik) - US White House economic adviser Larry Kudlow said that Canadian Prime Minister Justin Trudeau had stabbed the US in the back criticizing Donald Trump and expressing his determination to introduce new duties on the goods imported from the country in response to Washington's tariffs on metal imports.

"He was polarizing. He really kind of stabbed us in the back. He really, actually, you know what, he did a great disservice to the whole G7," US White House economic adviser Larry Kudlow told CNN.

On Saturday, after negotiations with Trump and the US president's departure from the G7 summit Trudeau said that the "US tariffs were kind of insulting" and that Canada "will not be pushed around."

Trudeau pledged to impose new tariffs on the imported US goods to defend Canadian workers. Trump slammed Trudeau for his statements, saying that during their meetings the prime minister "acted so meek and mild" and spoke out only after Trump's departure.

© AP Photo / Jesco Denzel
Worth a Thousand Words: Trump's G7 Summit Photo Stokes Social Media
On May 31, Trump announced he would remove an exemption on 25 percent tariffs for steel and 10 percent for aluminum from Canada, Mexico, and the European Union due to the national security threat posed by the imports of these metals.

Canada responded to the US move with counter-measures. In particular, Ottawa announced it would target US steel, aluminum and other products totaling 16.6 billion Canadian dollars ($12.8 billion). The tariffs will take effect on July 1.