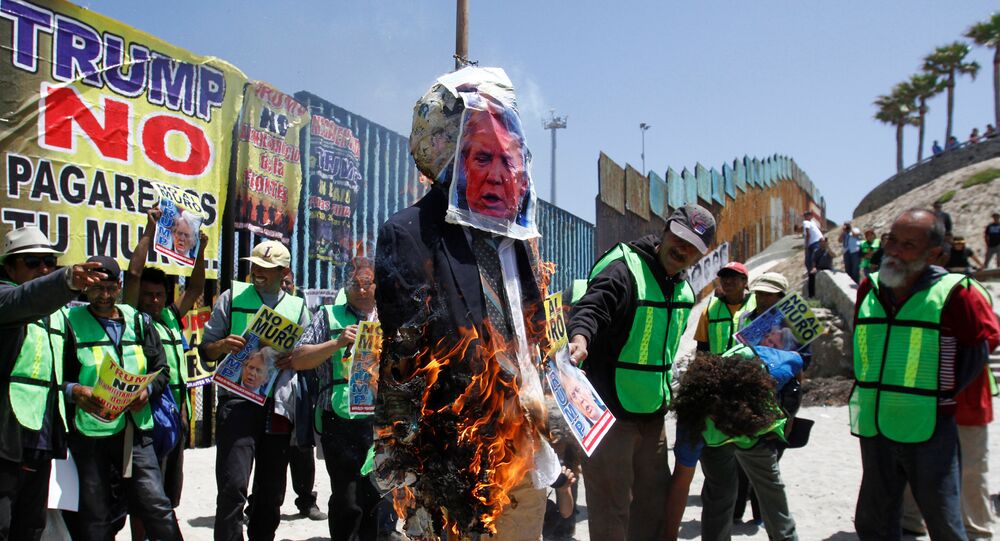 MOSCOW (Sputnik) - US President Donald Trump said on Thursday that he would not give his approval to any immigration bill which would not mention a wall on the Mexican border, and slammed current US immigration laws, including the Green Card lottery, the "catch and release" policy, and chain immigration.

"We actually have four different bills. Unless it [the bill] includes a wall, and I mean a wall, a real wall, and unless it includes very strong border security, there will be no approvals from me, because I have to either approve it or not," Trump told Fox News.

The president also expressed his opposition to the Green Card lottery, calling it "ridiculous," as well as to chain immigration, and the "catch and release" policy, which stipulates releasing illegal immigrants from detention until a court hearing.

"We have the worst immigration laws in the entire world by far, other countries laugh at us, and it’s because of the democrats," the president concluded.

© REUTERS / Yuri Gripas
‘He's an Opportunist': Trump's Immigration Tweets an Attempt to ‘Further the Attack on California'
During his presidential run, Trump campaigned for "a great border wall" to stop illegal immigration from Mexico. Earlier in February, three competing immigration proposals failed to get the 60 votes needed to pass the Senate, including the one, Trump threatened to veto, and another which met all of his demands as laid out by the White House.

In March, the US Congress passed the spending bill which included $1.6 billion in appropriations to build the wall, although it was less than the $25 billion sought by the Trump administration.