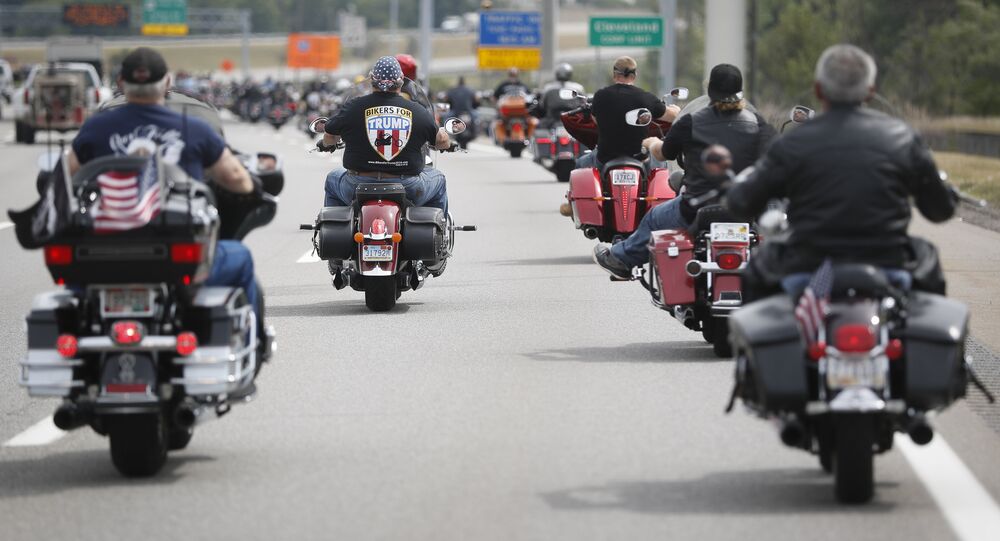 Good Luck With That: Biker Mob Heading to Washington to End Mueller 'Sham'

A large group of motorcyclists is said to be headed toward the US capitol of Washington DC with the intention of confronting US Justice Department Special Counsel Robert Mueller on Monday.

A group calling themselves the Deplorable Bikers — begun as an anti-Obama group just before the former US President's second term and transformed into a pro-Trump cabal during the latter's 2016 election campaign — tweeted that many of its adherents are headed to Washington DC to confront Mueller regarding his federally-mandated investigation into alleged collusion between the Kremlin and Trump's campaign.

BREAKING:
An angry mob is reportedly headed to Washington D.C. to confront Robert Mueller on Monday to demand his Witch Hunt be shut down. Reports say over 15,000 Bikers are involved!#RETWEET
Donate to support this action @ https://t.co/ZGQ9iC3Voc so we can post bail if need be pic.twitter.com/Yr6YALeLgr

​Reports claim that thousands of pro-Trump motorcycle riders have joined the mob, demanding that Congress defund what they refer to as the Mueller ‘witch hunt,' according to statements by spokespersons claiming to represent the group.

Omg! Just 2 night ago I said Patriots need to go in numbers in support of our POTUS and against this dark Shadow govt and be led by motorcycles! Incredible, my wish had been answered rather quickly! #GoPatriots4DJT

​Responding to accusations of collusion, Moscow has repeatedly denied interfering, calling the claims "absurd." As for the US president, he has denied colluding with the Kremlin, and has repeatedly called the federal justice department investigation a "witch hunt."

The committee did allege, however, that Moscow attempted to sow division in the US by carrying out cyberattacks and seeking to influence social media users.

Professor Explains How Macron Might Be Able to Influence Trump Policies