Retired US Lt. Col. Kevin Blaser spoke out on Wednesday about his dismissal from the Tennessee Air National Guard, describing it as a "death sentence."

Speaking with Military.com, Blaser, though he said he blames himself for the lapse in judgement that led to disciplinary action, believes he deserved a reprimand, not the end of his career.

"My analogy to all of this is I ran a stop sign," he told the publication. "I should have probably stopped the ceremony. That was bad judgement, I 100 percent admit that… I was given a death sentence."

On April 13, Blaser was asked to conduct a reenlistment ceremony for Master Sergeant Robin Brown, a public affairs specialist with the Tennessee National Guard state headquarters at the time. Brown surprised Blaser by opting to wear a dinosaur puppet on her hand as she recited the oath. When Blaser saw Brown sporting the puppet, he decided to just go along with it.

"I was very well aware she's a single mom with three young ones at home," Blaser explained. "She wanted to make a video for her young children to understand the significance of what 'mom' was doing."

According to Blaser, Brown also intended to honor the Month of the Military Child, April, which the Defense Department website describes as "a time to applaud military families and their children for the daily sacrifices they make and the challenges they overcome."

Three days after the video was filmed, Blaser was asked to start filing his retirement paperwork after the higher-ups deemed the recording offensive and lacking respect for the oath and all it represents. 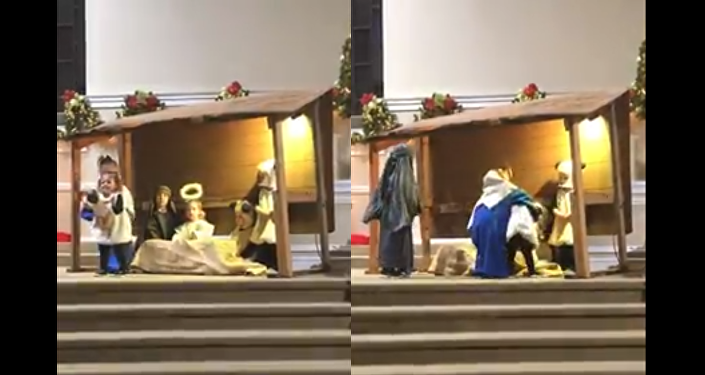 "Out of context, it looks horrible, and I understand their outrage at it. But at that point… I was prepared to accept the consequences of my actions," Blaser said. "I told them if it came to that, I'd retire. If there was no other way around it."

By the time April 18 rolled around, Blaser was packed and headed into military retirement.

Though he's now he's trying to figure out what he'll do next with his life, Blaser suggested that the dino puppet wouldn't be the last time military officers try to shake things up.

"I want senior leadership at all levels [to know] that social media is here to stay," he said. "Had they taken a few days, and taken a breath and let this firestorm blow over," things might have ended differently. "But still, this is going to happen more and more."

Brown's reenlistment was also nullified and the non-commissioned officer who filmed the incident was reprimanded. The retired colonel told Military.com that he'd heard Brown was trying to appeal the decision.

Trump Says Will Not Comment on Using Military Force in Iran

US Launches ‘Military Response’ to Caravan of Asylum Seekers