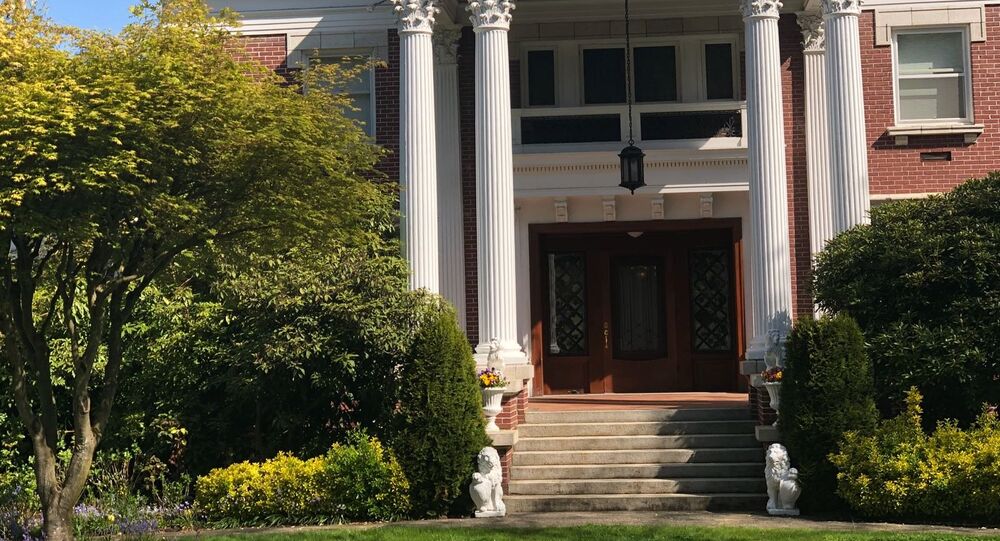 SEATTLE (Sputnik) - US authorities are combing through the premises of the seized Russian Consul General residence in Seattle, and regular police officers have been removed from the site, a Sputnik correspondent reported on Thursday.

The officials, wearing plain clothes, were seen moving in and out of the shuttered residence and walking around the outside of the property.

One vehicle is parked on the premises, while another is parked outside behind the building.

© Sputnik
Russian Consulate Sweep in Seattle Crosses ‘Red Line’ – Moscow
Throughout the day, several vehicles arrived and departed from the residence, as various authorities arrived to tour the property. It was unclear exactly exactly what they were doing.

Three police officers who were stationed at the residence’s gates on Wednesday — two at the front and one at the back — have been removed, and no law enforcement officers are currently on the site.

The Russian flag continues to fly over the building.

For the first time since Russian diplomats left Seattle on Tuesday, a trash truck came to pick up rubbish from the neighborhood dumpsters, including from one located outside the residence.

The dumpsters have been attracting local journalists, who were seen examining garbage bags left behind by the Russian diplomats. Many posted pictures of their finds on social media, detailing the contents of the trash, which included shredded paper and leftover food.

On Wednesday, US officials came to the closed residence of the Russian Consul General in Seattle, opened the gates and entered the building after breaking all the locks. Commenting on the move, US State Department spokeswoman Heather Nauert said on Twitter that it was not intrusion but a legal action in response to "Russia’s continuing, outrageous behavior." The diplomat added that the US officials entered the residence to ensure that it had been cleared.

Russian Foreign Ministry's spokeswoman Maria Zakharova said on Thursday that Washington grossly violated international legal norms at the residence and called the actions surrounding the seizure of the property "outrageous and unprecedented."

Zakharova reiterated that Moscow insists on the return of all six diplomatic facilities "illegally seized by the US authorities" over the last two years.

The diplomat added that if the incident had been caused by legal issues, then the United States should provide the details of the law that was used to justify the seizure of the Russian property.

© REUTERS / Lindsey Wasson
Closure of Russia's Seattle Consulate to Effect US Citizens Over Time – Council
A representative of the Russian ministry warned that if the United States considers its actions at the residence of the Russian Consul General a "lawful response," then maybe Russian officials should also "visit" their US partners.

On March 26, US President Donald Trump ordered the expulsion of 60 Russian diplomats and the closure of the Russian Consulate in Seattle by April 2 over claims that Moscow played a role in the poisoning of an ex-spy in Salisbury, allegations which Russia strongly denies.