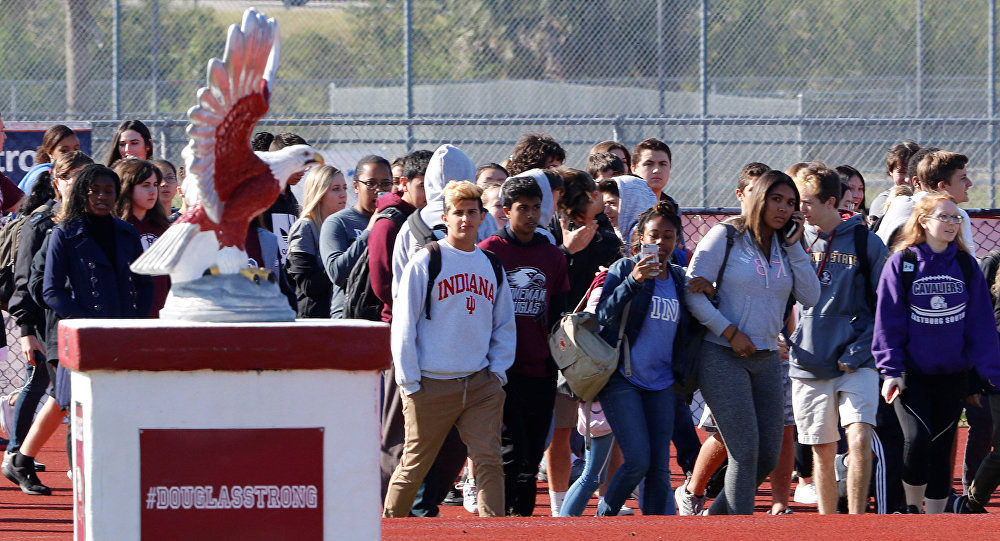 As part of the heightened security protocols, students are required to use clear backpacks supplied to them by the school as well as wearing ID badges at all times. Some of the security measures were announced in a letter from the school's superintendent last month. In a letter released by the School Board of Broward County on March 21, school superintendent Robert Runcie said students would only be allowed to carry clear backpacks after spring break.

Some students don't seem pleased by these developments, though.

​Marjory Stoneman Douglas student Sarah Chadwick, one of the organizers behind the #NeverAgain movement, posted on Twitter Sunday that her school is "starting to feel like a prison." The #NeverAgain movement was spearheaded by Parkland students after the massacre to advocate for tighter gun legislation to prevent gun violence.

"Tomorrow we will have to go through security checkpoints and be given clear backpacks, my school is starting to feel like a prison," Chadwick tweeted.

​Another student, Laura Hogg, also commented on the clear backpacks on Twitter Monday.

"My new backpack is almost as transparent as the NRA's agenda, I feel sooo safe now," Hogg tweeted. "As much as I appreciate the effort we as a country need to focus on the real issue instead of turning our schools into prisons."

In addition to clear backpacks, the Broward County school district has ensured there will be increased police presence on campus. Florida Highway Patrol will also station eight troopers at the school's various entrances. A single entry point, rather than the four entrances it uses now, is also being considered.

The school district is considering the option of installing metal detectors at the school's single entrance, which is not yet in place, according to a recent letter to parents from school principal Ty Thompson

Seventeen people, most of them students, died at Stoneman Douglas after former student Nikolas Cruz walked onto campus February 14 and made his way through school buildings, gunning down those he encountered. There have been multiple incidents at the school since the shooting, including a student making a threat on social media, two students being arrested for bringing knives to school campus as well as the arrest of the shooter's brother, Zachary Cruz, for trespassing on school grounds.

According to WPTV, the student who made a threat on social media posted photos with a handgun and bullet and included threatening messages.

"A Broward Sheriff's Office deputy responded to the school to investigate a tip and interviewed the 10th-grader about photos he shared on Snapchat," the sheriff's office said in a statement on March 20. "In one image, the teen displays a gun in his waistband. In a second image, he shows off bullets."

The student was admitted to a mental health facility for evaluation after officials were made aware of the photos.

One student was arrested for pulling out a two-inch blade during an argument with a female student on the school campus; another student brought a nine-inch knife onto school grounds in their backpack. The knife was confiscated after a student who noticed the weapon on his school bus ride alerted school officials about it. Both students carrying weapons were arrested by deputies.

On March 19, Zachary Cruz trespassed the school campus to "reflect on the school shooting and soak it in." He was arrested by authorities and is currently being held at the Broward County jail in Fort Lauderdale on $500,000 bail — the same place his brother, Nikolas, is awaiting trial for the alleged perpetration of the February 14 massacre.