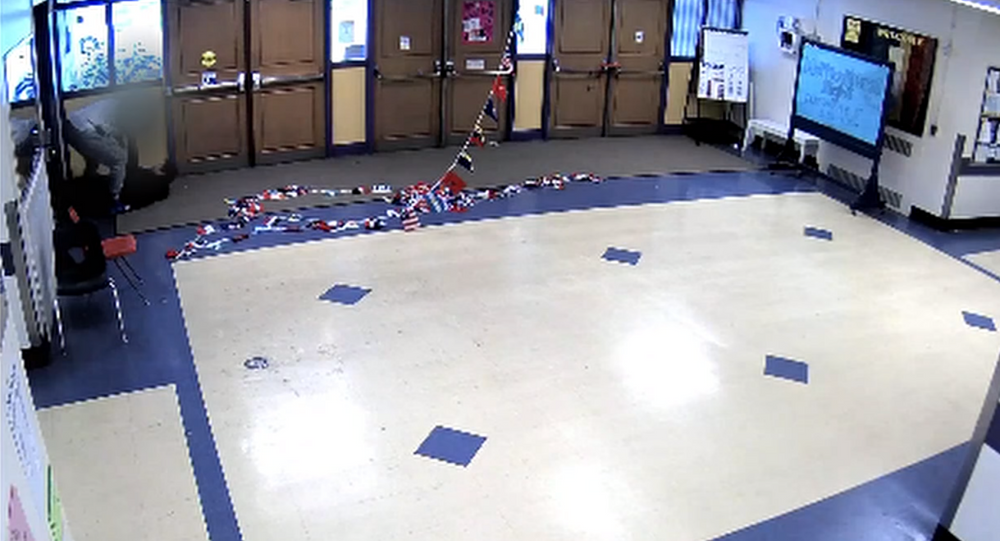 Wanting to change how school security guards de-escalate incidents, Seattle resident Diana Lightner opted to go public on Saturday with footage that shows a guard slamming her 12-year-old son to the ground during a confrontation.

The incident, which took place on February 16, was caught on Washington Middle School's surveillance camera. It's unclear when Lighter was able to obtain a copy of the surveillance footage.

​The video first shows Lightner's son tearing down school decorations before a security guard comes around the corner and ultimately slams him to the ground seconds after cornering him by the school's entrance. Moments after landing on the ground, her son is seen shuffling his legs while the guard towers over him — a stretcher is later brought in after he's unable to stand up.

"I received a phone call at work. They told me they had taken [her son's] phone away [and] that he had been destructive to school property by tearing decorations down," Lightner told local news station KING 5. "Honestly, because I know my kid, I was like, 'Make him stand up. I'm sure he can stand up.' I'm not one of those over-reactive parents."

But it wasn't until after watching the recording that she realized her son, who she noted has behavioral issues, wasn't overreacting. Doctors later determined that her son had suffered no serious injuries, but that he was very sore.

"I was talking to social workers, talking to doctors and they were basically all aghast at the amount of force used against a 12-year-old when no more force should have happened than a bear hug," Lightner added.

Speaking to KIRO 7, Lightner told the outlet that she ended up deciding to go public with the video after realizing the situation could've been much worse had the officer been armed.

"All I could think was, ‘This guy didn't have the impulse control to not hurt my kid.' What if he was armed or what if my kid could have reached for that gun?" she told the station. "So that really got me thinking and that's what made me share it with anyone."

Lightner thinks more needs to be done to improve how school guards de-escalate incidents on campus.

"In the video, it's very clear my son was held by him, pushed into a wall and then thrown to the ground… I don't want this to happen to another kid."

In a statement to KIRO 7, Kim Schmanke, a spokesperson for Seattle Public Schools, stated that an investigation has been launched to determine whether "proper procedures were followed" by the guard.

"Because it is under investigation, we are limited in commenting further or providing more specifics at this time," Schmanke added.

Lightner's son has since transferred to another public school. It is unclear if the guard has been placed on administrative leave pending the investigation.

Police Responding to 'Reports of Gunfire on Campus' in Seattle (VIDEO)