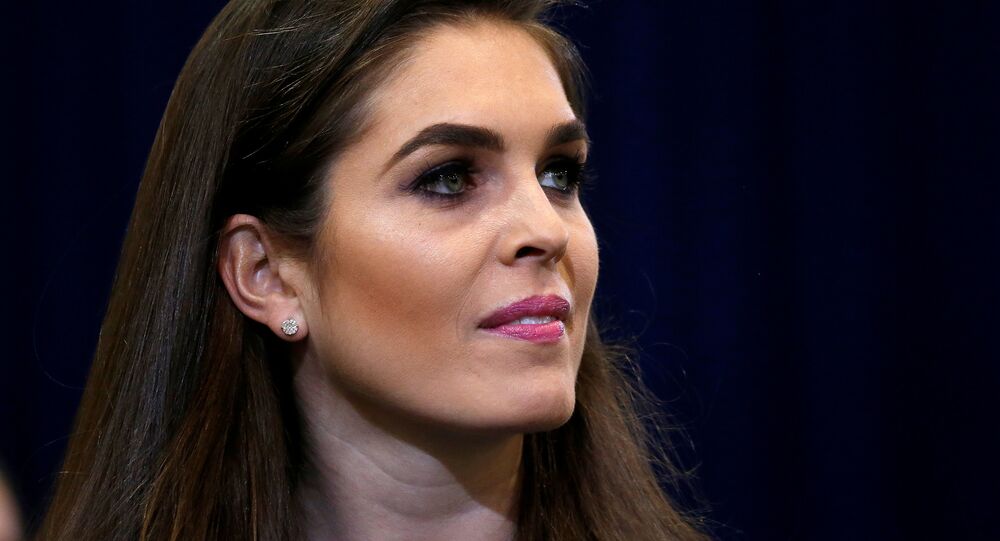 WASHINGTON (Sputnik) - White House Communications Director Hope Hicks is stepping down from her position to pursue other career opportunities, US President Donald Trump announced in a White House statement.

"Hope is outstanding and has done great work for the last three years. She is as smart and thoughtful as they come, a truly great person," Trump said in a statement released by the White House.

"I will miss having her by my side but when she approached me about pursuing other opportunities, I totally understood. I am sure we will work together again in the future," the statement continued.

Meanwhile, White House Chief of Staff John Kelly said about Hicks in a separate statement, "To say that she will be missed, is an understatement."

© AFP 2021 / NICHOLAS KAMM
'One-Woman Press Team': Meet Hope Hicks, New White House Communications Director
Hicks is one of Donald Trump's longest-serving aides. However, White House spokeswoman Sarah Sanders stressed on Wednesday the timeline for Hick's departure was still unclear. She also said that her resignation was not in any way related to Hicks' Tuesday testimony before the US House Intelligence Committee on its investigation into alleged Russian interference in the 2016 presidential election.

US media recall that Hicks, 29, was one of the first among to sign on to Trump's team when the then-businessman began his campaign for the presidency. She became one of Trump's most trusted advisers.

Hicks took over as head of White House communications last September after the very brief tenure of Anthony Scaramucci. The young adviser has become an unlikely veteran in an administration with a high level of staff turnover.

Hicks said in a farewell statement: "There are no words to adequately express my gratitude to President Trump. I wish the President and his administration the very best as he continues to lead our country."