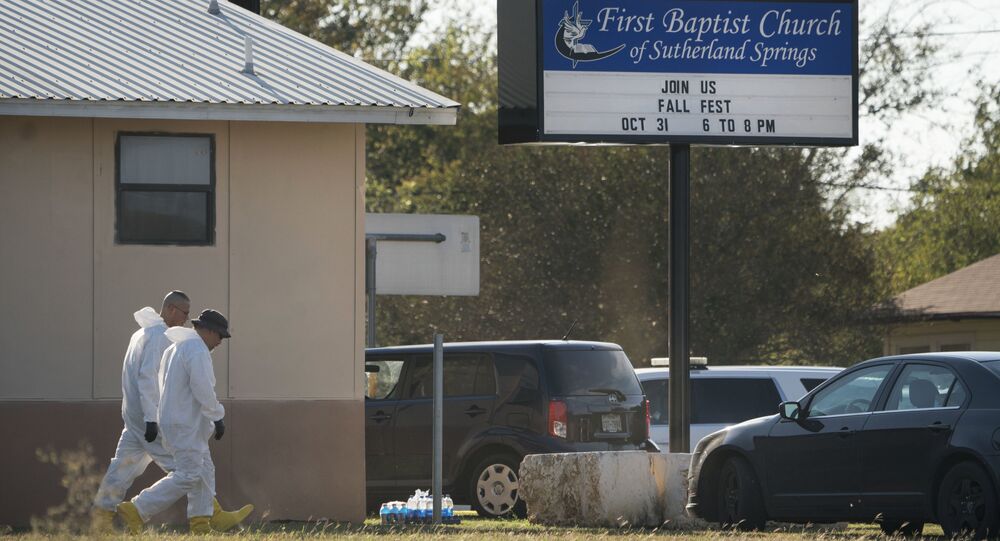 The Federal Bureau of Investigation Special Agent Christopher Combs said Tuesday that FBI has failed to access the Texas gunman's encrypted cell phone. Combs added that the device had been transported to FBI headquarters in Quantico, Virginia, for further examination.

WASHINGTON (Sputnik) — Texas church massacre gunman Devin Kelley's cell phone was turned over to the Federal Bureau of Investigation for analysis, FBI Special Agent in Charge of the investigation said during a press conference.

"The phone of the subject was turned over to us, we flew that to on a DPS plane last night to Quantico, they're in the process of looking at the phone," Christopher Combs told reporters.

Combs added that at this point they are unable to get into Kelley's phone because of the advanced technology and encryptions, but they will continue to work to gain access.

​Combs also said that the advanced technology of the password protection on electronic devices has posed difficulties for the Federal Bureau of Investigation in the past.

© REUTERS / Nick Wagner
‘This Was Mishandled’: US Air Force Didn’t Notify FBI of Texas Church Shooter’s Criminal History
“It highlights an issue that you’ve all heard about before, with the advance of the technology and the phones and the encryptions, law enforcement, whether that’s at the state, local or federal level, is increasingly not able to get into these phones,” Christopher Combs was quoted by the US media outlets as saying.

However, Special Agent refused to specify what kind of phone Texas shooter had.

"I'm not going to describe what phone it is because I don't want to tell every bad guy out there what phone to buy to harass our efforts on trying to find justice here," Combs was quoted as saying.

No Other Suspect Involved in Texas Church Shooting

The Texas Public Safety Department Regional Commander Freeman Martin said during a press conference on Tuesday that there was no reason to believe there is another suspect involved in the deadly shooting at a church in Sutherland Springs.

"We have no reason to believe, no information that anybody else was involved in this crime," Martin said.

Martin pointed out that the crime was not politically motivated or based on religious beliefs. He added that the authorities hope to finish crime scene investigation and forensic analysis by Wednesday night

At least 26 people were killed and 20 others injured in a church shooting in Sutherland Springs on Sunday, with the perpetrator Devin Patrick Kelley, whose motives remain unknown, having been found dead following the incident.