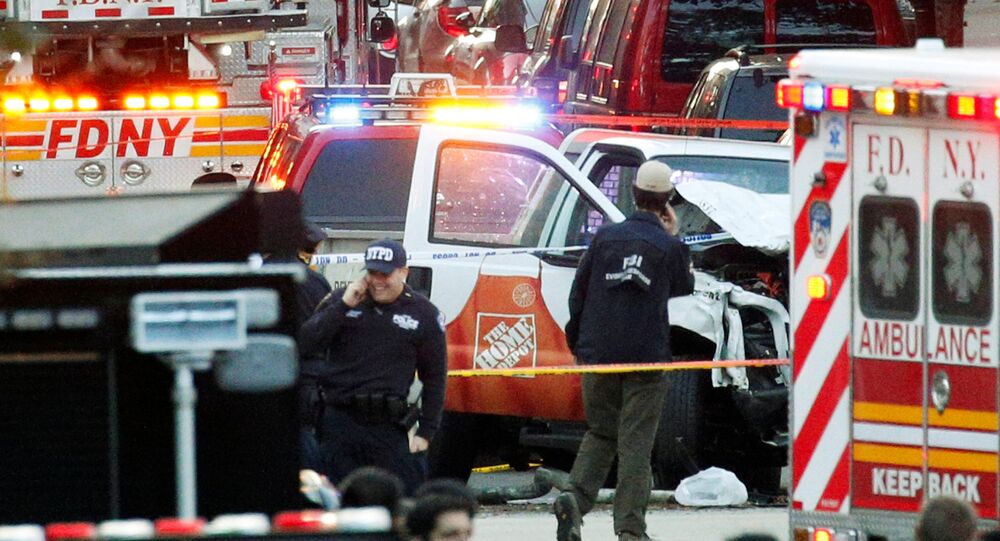 On Tuesday, a man drove a truck through a bike path in Manhattan, leaving eight people killed and 11 injured. The attacker has been identified as Uzbek national Sayfullo Saipov. According to the NYPD Commissioner, it appears that the attack was made "in the name of ISIS."

The NYPD has confirmed the identity of the suspected perpetrator of the Manhattan attack, Sayfullo Saipov, an Uzbek national, who had been preparing it for several "weeks."

Saipov, who allegedly worked as an Uber driver in New Jersey, came to the United States from Uzbekistan in March of 2010, according to police.

NYPD Deputy Commissioner John Miller has said that police have found notes in the vehicle of the suspected attacker in Arabic that allegedly said that Daesh "will endure forever."

"He did this in the name of ISIS," he added.

Authorities are currently examining Saipov's connections, however, presuming that he has been in contact with other subjects of state or federal investigations.

According to Cuomo, evidence shows that after Saipov came to the US he started to "become informed about ISIS [Daesh] and radical Islamic tactics."

It was earlier reported that eyewitnesses told the police that upon stepping out of the truck, Saipov yelled "Allahu Akbar," Arabic for "God is Great." He also left a handwritten note in the truck used to commit the attack pledging allegiance to Daesh, according to multiple published reports citing senior law enforcement officials.

READ MORE: Terror by the Tonnage: What is Known About Deadly New York Truck Attack So Far

Earlier, Cuomo said that the incident was a "lone wolf" attack and that there was no evidence it was part of a wider plan.

Saipov was shot by police officers and was then taken to hospital. He is currently in custody and is expected to recover from his wounds.

The attack has claimed the lives of eight people, including several foreign nationals, and left 11 injured. It is the deadliest act of terror in New York since the 9/11 attacks in 2001.The perpetrator has been identified as an Uzbek national, Sayfullo Saipov, who reportedly came to the United States in 2010.