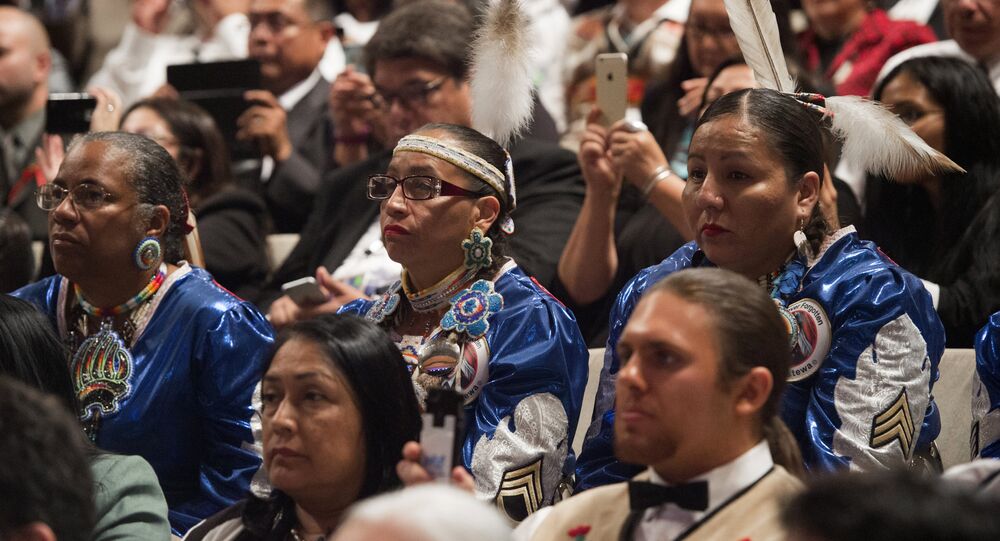 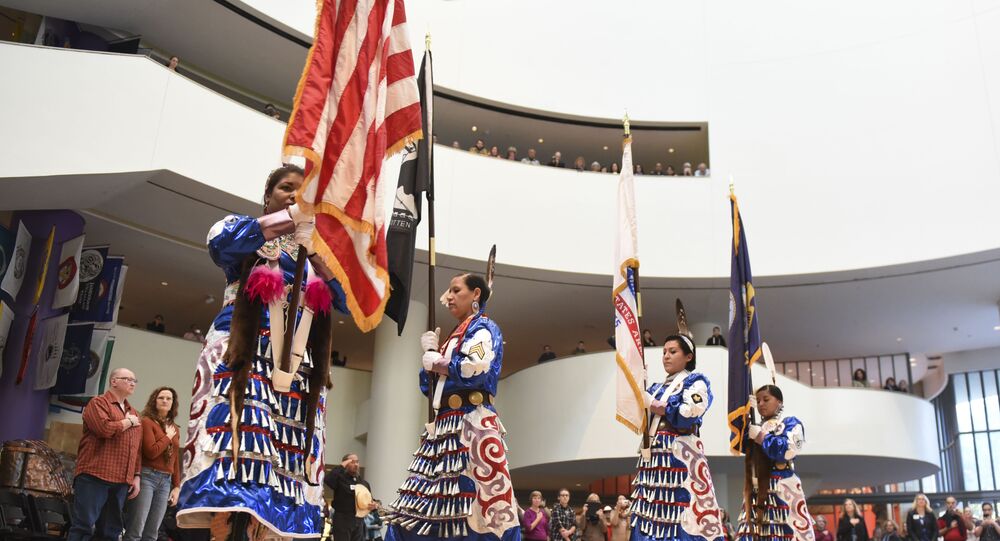 The Canadian company Aquila Resources Inc. is planning to construction of a mine in the areas where burials of the Menominee Indian Tribe are located, threatening to destroy sites that are considered to be valuable by the local tribes.

MILWAUKEE (Sputnik) — The plans of Canada’s exploration company to mine gold, zink, copper and other minerals in the US Midwest region threatens sacred sites of the Menominee Indian Tribe and the Great Lakes’ ecosystem, tribe Chairman Gary Besaw told Sputnik.

Besaw came to the Annual Convention of the National Congress of American Indians (NCAI) in Wisconsin to attract the public’s attention to the issue of the US federal government breaking its obligations and promises to the tribe.

"The Canadian company [Aquila Resources Inc.’s] is looking at developing a mine on the interstate boundary river between the states of Wisconsin and upper Michigan. They are looking at doing it on the upper Michigan side of the river," Besaw said. "The footprint of that mine is on ancestral Menominee burial sites, mounds, raised garden beds. There is a whole village seen there, and this proposed mine would destroy them. This area is up near our tribal nation's creation story."

Besaw explained that at one time that area was the Menominee Indian Tribe’s ancestral territory, and the Menominee people had moved away when they had ceded that territory through treaty to the US government. So, while the natives are not there now, their ancestral remains and the mounds are there and have been there.

Local opposition to the proposed Back Forty Mine continues to grow! #noback40mine pic.twitter.com/vaESMHWzge

"We are trying to protect not only those cultural sites but also protect the Menominee River ecosystem and the whole Great lakes system," he said. "After they take all of the material out, all of the gold, silver, copper everything they want out of there of value, what remains is almost like talcum powder, pulverized residual that they put in big slurry ponds. When this sulfide mixes and is exposed to air and water it creates sulfuric acid."

"The sulfuric acid over time gets into the groundwater and that sulfuric acid dissolves other toxins and they find their way, being only 50 yards from Menominee River, into the Menominee River that then drains into the Great Lakes," the tribal leader added. "We have a responsibility through our creation story for protecting that area as well as these waters as Menominee people."

Menominee Nation Chair Gary Besaw calls on tribes to oppose Back Forty Mine “This is a battle for water” #NCAIAnnual17 #NoBack40 pic.twitter.com/jF76WnEKy4

Besaw noted that the proposed Back Forty Mine project is an open pit metallic sulfide mine.

"It's on a 580-acre parcel with the actual hole being probably 750 feet, what we consider when we try to get a visual 2.5 Statue of Liberties deep," he added. "We do a lot of football here, and a football field is about 100 yards, so we say it's about five by seven football fields across. It's that big and it's only 150 feet or 50 yards from the Menominee River."

© AFP 2020 / Nicholas KAMM
NCAI: Trump's Administration Still Lacks Key People for Daily Work With Tribes
In order for the company to go ahead with the project, it requires four permits, and it has already received three, including the Mining permit, the Air Use Permit, and the National Pollutant Discharge Elimination System (NPDES) permit. It only needs to get the final wetlands permit.

"The wetlands permit, they've put in all of their materials and the Michigan Department of Environmental quality is now reviewing to see if it's administratively complete meaning that it has all the components necessary for it to be called a complete application," Besaw said. "After that, it will be going for review and public comment but that part has not started yet until we know that it's administratively complete."

Besaw went on to explain that the tribe is concerned that the federal government made an agreement with the state of Michigan to allow them authority over what's called the Clean Water Act dredge and fill permits.

The chairman stressed that they believe that some of their treaty and Trust obligations "somehow have been diminished or somehow in limbo."

"The state is saying we do not have to follow those protections because we never signed a treaty with you, Michigan never signed a treaty with you, the federal government did. And when we talk about the federal government they say since we delegated the dredge and fill authority to the state, now it's a state action," he explained.

"I can assure you Menominee will fight to defend what we believe is our rights and what really should happen," he stressed.

Besaw also noted that this is not the only instance when the treaty obligations get diminished.

"As the healthcare plan changes and they look at delegating more power to the states, the same issue applies, there are treaty obligations," he said. "The federal government has made and promised for this land we’re standing on to the tribes and our concern is they will diminish much of those treaty obligations again when the states now have the authority to make determinations on funding for healthcare needs, so that might be a version of the same issue of that I am speaking of regarding the back forty mine."

© AFP 2020 / Nicholas KAMM
US Tribes May Face Severe Budget Cuts
The chairman also pointed out that while Menominee is land rich and resource-rich, it has high poverty rates and high unemployment.

The US federal government recognizes 567 Indian nations in 33 states, including 229 in Alaska. Native American tribes are further recognized by their respective state governments, according to the NCAI.