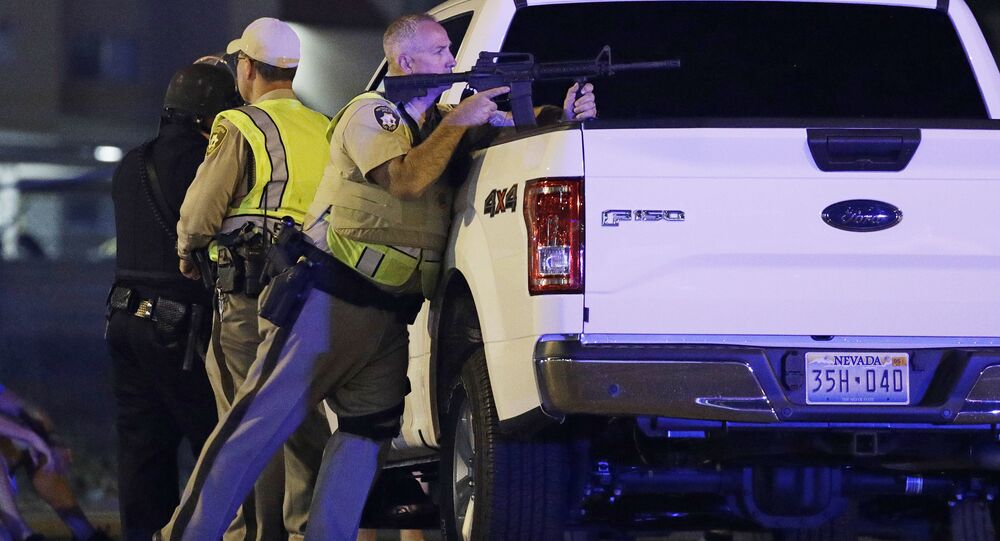 The Las Vegas Metropolitan Police has released new police body camera footage revealing the utter chaos police officers felt as they attempted to figure out the location of the gunman and save lives in the Vegas Strip shooting.

The footage, released Tuesday night, showed officers as they ducked from the shooter's bullets, yelled at people to evacuate the area, and maneuvered to try to pinpoint his location from behind cinderblock walls and other cover.

"They're shooting right at us guys, everybody stay down," one officer said amid the sound of sirens, gunfire and screams.

© AP Photo / Eric Paddock
WATCH: Shocking Video From Inside Las Vegas Shooter’s Hotel Room Emerges
"Where's it at?" another asked, referring to the presumed location of the gunfire. "From the Mandalay Bay [Casino]. It's coming out of the window," a third said.

"Get behind cover…Go back, go back. Get back, get back," another officer yelled in amid a steady stream of machinegun fire.

Police suspect 64-year-old Stephen Paddock of opening fire on thousands of concertgoers at a country music festival on the Vegas strip from the 32nd floor window of the Mandalay Bay hotel on October 1. At least 59 people were killed, and over 530 injured in what is now the deadliest mass shooting in US history. Paddock reportedly took his own life as officers closed in on his hotel room.

Also on Tuesday, Marilou Danley, Paddock's girlfriend, returned from the Philippines to the US for questioning by police. It was reported that Paddock had wired her $100,000 USD while she was out of the country before Sunday's massacre.