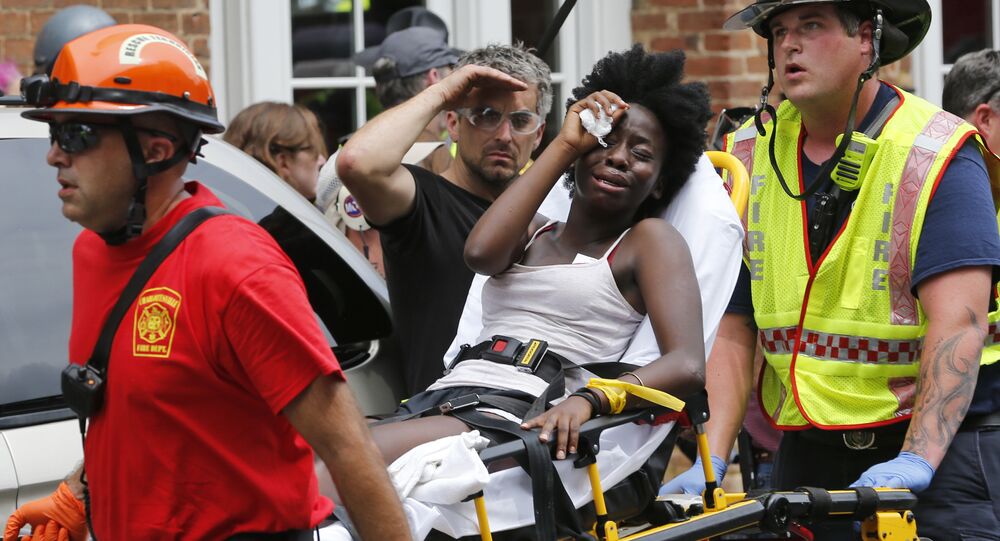 Trump has finally changed his unapologetic stance on events in Charlottesville, Virginia and signed a Senate resolution condemning violence as an act of terrorism.

"On Thursday, September 14, 2017, the President signed into law… S.J.Res. 49, which condemns the violence and domestic terrorist attack that took place during events between August 11 and August 12, 2017, in Charlottesville, Virginia," the release said on Thursday.

The resolution recognizes the first responders who lost their lives, offers deepest condolences to the families and friends of those individuals who were killed, the release said.

The law also rejects "White nationalists, White supremacists, the Ku Klux Klan, neo-Nazis, and other hate groups, and [urges] the President and the President’s Cabinet to use all available resources to address the threats posed by those groups," according to the release.

© REUTERS / Alejandro Alvarez/News2Share
Man Who Fired Gun at Charlottesville Rally Arrested and Charged (VIDEO)
On August 12, white nationalists demonstrated in Charlottesville to protest the removal of a statue of a Confederate general Robert E. Lee. from a city park.

Trump's initial response to racism in Charlottesville faced a storm of criticism. The statement of the US president in which he condemned hatred "on many sides" apparently lacked clarity. Both Democratic and Republican politicians claimed that evil must be called by its name and in Charlottesville's violence there can be only one side.

Direct condemnation of the Ku Klux Klan, neo-Nazis and white supremacists followed days after the clashes when Trump finally stated that those who resort to violence in the name of racism are criminals and such display of hatred has no place in America. However, at that time Trump stopped short of defining the events as an act of domestic terrorism.

On September 14 Trump met with Tim Scott, the only African American Republican in Senat, to discuss race relations and issues important to communities of color. Despite the Scott’s critical attitude to Trump’s indecisiveness on the Charlottesville matter Trump stood by his initial remarks.

“When you look at really what’s happened since Charlottesville, a lot of people are saying and people have actually written, ‘Gee, Trump may have a point.’ I said there’s some very bad people on the other side also. But we had a great conversation,” Trump said implying that he was right all along.