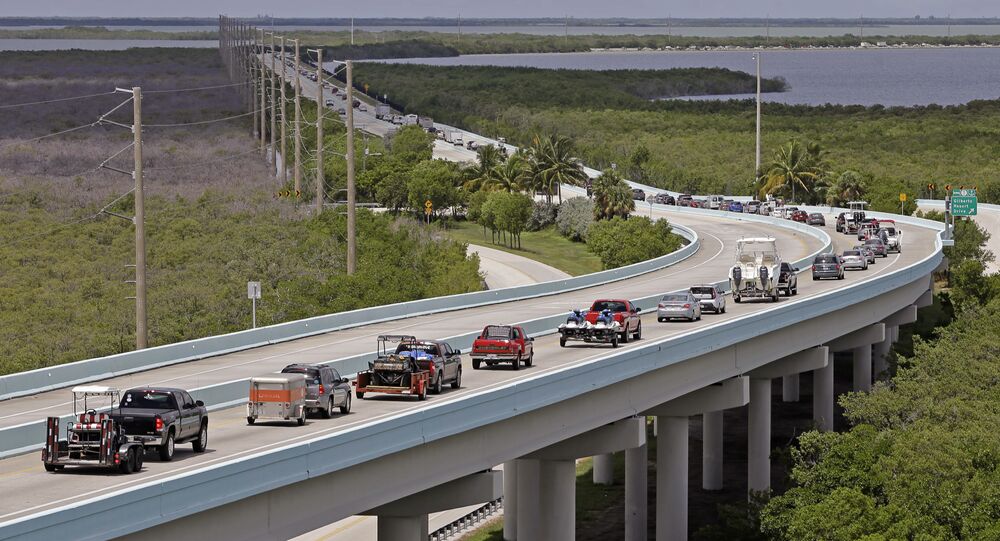 With Texas and Louisiana still trying to come to grips with the destruction of Hurricane Harvey, Florida has gone into full preparation mode as Category 5 Hurricane Irma makes its way toward the Sunshine State.

State officials have already called for residents to head to shelters and obey all evacuations orders: more than 100,000 were told to evacuate from Miami-Dade County starting early Thursday.

​"I cannot stress this enough: Do not ignore evacuation orders," Florida Governor Rick Scott said during a Thursday conference. "We can rebuild your home, but we cannot rebuild your life."

​According to reports, Hurricane Irma is likely to create the largest mass evacuation in US history: Miami-Dade county, along with nearby Broward and Palm Beach counties have a combined population of roughly 6 million people.

"Do not focus on the exact path of this storm," Scott said in an earlier conference Wednesday. "A storm of this size could have effects statewide and everyone must be prepared."

​With a state of emergency declared across the state, residents have started stocking up on food, water and several other essentials.

​The Florida governor activated 4,000 members of the Florida National Guard with even more personnel to be added Friday in order to help with evacuations, sheltering and the overall aftermath Irma is scheduled to leave behind.

​Scott also rescinded all weight and driver restrictions and even suspended tolls for the duration of the storm's impact to allow for more efficient transport of food, fuel and emergency supplies.

The US Army Corps of Engineers also began to release water from Lake Okeechobee Tuesday to lower water levels prior to Irma's expected due date, which is slated between Sunday and Monday.

"We anticipate direct rain over the lake could add a foot to the water level. We've seen basin runoff from the past events cause the lake to rise three feet over the span of a month," Col. Jason Kirk, a Jacksonville district commander, said in a statement. "We want to do all we can to ensure we have as much storage as possible for Irma."

​"This is not a storm you can sit and wait through," Scott said. "You don't have to drive hundreds of miles or leave the state to be safe. Go to shelters."

Currently making its way toward the Turks and Caicos Islands and the Bahamas, Hurricane Irma, a churning maelstrom with 175 mph sustained winds, destroyed several Caribbean islands Wednesday. Prime Minister of Antigua and Barbuda Gaston Browne bleakly summarized the damage to the island of Barbuda as "absolute devastation."

​At least 11 people are dead after Irma swept across several Caribbean islands, and that number is expected to climb. Gérard Collomb, the French interior minister told radio station France Info that at least eight of the victims died in the French Overseas Collectives of St. Martin and St. Barthelemy.

​The destructive Hurricane Irma isn't the only troublesome cyclone tearing through the Atlantic — Hurricane Jose was upgraded to a Category 2 storm and is expected to gain winds of 111 mph or greater by Friday, according to The Weather Channel. Jose is nearing the Leeward Islands, but it's uncertain how close it will come it the West Indies landscape as it may veer northward and out to sea instead of following Irma's westward track.

Into the Storm: US Plane Flies Through Hurricane Irma