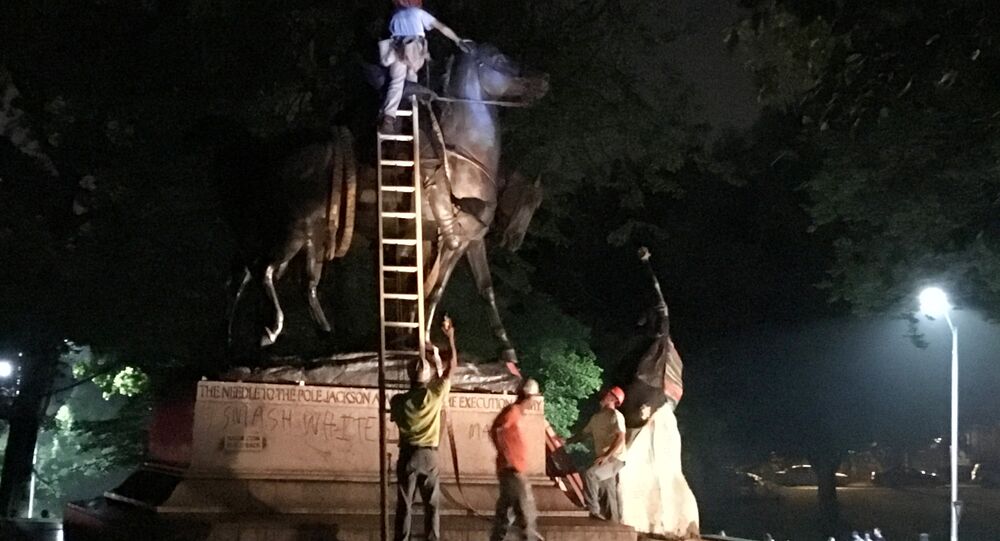 As Confederate statues fall around the US, Baltimore removed its pro-slavery monuments under cover of night following a year of indecision by city officials. Their removal follows last weekend’s violent “Unite the Right” rally in Virginia, ostensibly held to protest the removal of a statue of Confederate General Robert E. Lee in Charlottesville.

Radio Sputnik’s Loud and Clear spoke with Dominique Stevenson, program director for the American Friends Service Committee’s Friend of a Friend program and Sputnik news analyst Walter Smolarek about the removal of Baltimore’s statues and how the racism symbolized by the statues goes to the very core of the US social, political and economic order.

According to Stevenson, a coalition of Baltimore activists had been planning to take down the statue of Confederate General Stonewall Jackson themselves, and she believes the city’s abrupt decision came because officials caught wind of their intentions.

​​"We’re glad that it’s down, but the fact of that matter is the mayor of Baltimore needs to work harder on dismantling white supremacy, in terms of economic development, in terms of the political system itself and how oppressed black folks in Baltimore continue to be," she said.

"Those monuments actually should have been down a long time ago, and I’m not willing to give that much credit to the city for doing it. They’re doing it because it’s trendy, you’re seeing it happen all over. But I do also believe that they got wind of the plan and that was the urgency of doing it in the middle of the night."

Stevenson said the statues were erected during a time when people wanted to romanticize the South’s role in the US Civil War, saying, "They’re actually not remnants of white supremacy. To me it just demonstrates how prevalent white supremacy continues to be in this country. They are simply symbols, but we have to do the work to dismantle the system that continues to keep so many people locked out, and it’s not just white supremacy, it’s capitalism as well."

Smolarek pointed out that the other statue that was removed was made for someone who wasn’t part of the Confederacy at all. The statue was of Supreme Court Justice Roger Taney, who presided over the Dredd Scott decision and infamously ruled that Scott, a slave who had sued for his freedom after being moved to a free state in the union, had, "no rights that a white man was bound to respect."

Such monuments show "that the system of white supremacy continues to exist, it's not just a relic of the past, it didn't just exist in the southern states that seceded from the United States," Smolarek said. "It's a reminder that this is the same fundamental social order that capitalism is so dependent on."

Host Brian Becker noted how US President Donald Trump in recent days had equated far-right white nationalists at Charlottesville rally with anti-racist and anti-fascist counter protesters, suggesting that both groups were to be blamed for the violence that erupted last weekend. Becker asked if US racists felt empowered by Trump's tone.

"Because they're being enabled by Donald Trump and by many other racist politicians, I think it is a threat that will be here for quite some time," Smolarek replied. "But of course we have to keep in mind that the anti-racist forces, the progressives, we are many times larger than they are, and if we continue to mobilize in large numbers and confront the racists like they did in Charlottesville, I think that we can make it very, very clear that they are marginal and can be defeated."

The Daily Uprising Across America: From Milwaukee to Baltimore