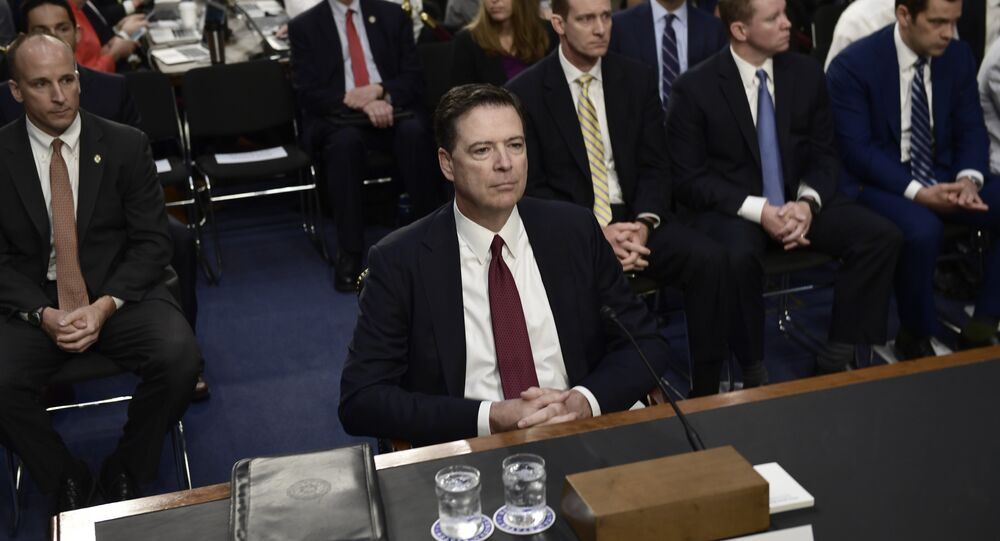 Former Federal Bureau of Investigation (FBI) Director James Comey’s testimony to a US Senate hearing did further political damage to President Donald Trump, but also cleared him of having been a subject of inquiry, former FBI Special Agent Colleen Rowley told Sputnik.

WASHINGTON (Sputnik) — Testifying before the Senate Intelligence Committee on Thursday, former FBI Director James Comey said that President Donald Trump did not ask him to drop his probe into alleged Russian meddling in the 2016 US election.

"Overall it did do some further damage to Trump… [but] I don’t think there was a whole lot new learned," Rowley said on Thursday. "Finally we learned that Trump was personally not a subject of the investigation at least until Comey was fired."

© REUTERS / Joshua Roberts
The One Thing Senate Wanted to Hear From Comey But Didn't
Rowley, a retired FBI special agent and division legal counsel noted that Comey had admitted to inappropriate behavior himself during the hearing before the US Senate Intelligence Committee.

"I thought the most interesting thing they did that did come out now was that Comey was responsible for leaking his own memorandum to a law professor at Columbia University," she said.

Neither Republican nor Democratic senators had followed up on Comey’s admission and tried to learn the full details behind it and the extent of the leaks he had performed himself or n knew about, Rowley observed.

"It is a pity that no senators followed up on that or asked how often he had done it before and if he knew who else (among senior officials) had been leaking. That was a missed opportunity," she said.

© AP Photo / Andrew Harnik
Trump After Ex-FBI Chief's Testimony: 'WOW, Comey is a Leaker'
Comey produced no hard evidence of wrongdoing on Trump’s part, but he had proved skillful at painting a critical portrait of the president in his testimony, Rowley assessed.

"Comey is very good on his feet. He is fast thinking and very political. He is a performer," she said.

Media coverage of the hearing was biased against Trump and highly sympathetic and uncritical towards Comey, Rowley commented.

"Our news coverage was very one-sided," she said.

© AFP 2021 / Mandel NGAN
Comey Says Many Reports on Russia Allegedly Based on Classified Info Were 'Dead Wrong'
In previous published comments, Rowley has recalled that when Comey was deputy attorney general, he had signed off on highly illegal programs, including warrantless surveillance of Americans and torture of captives.

As top law enforcement official of the George W. Bush administration, Comey presided over post-September 11 cover-ups and secret abuses of the US Constitution, including fabrications used to launch wrongful wars, and exhibited plain incompetence, Rowley has stated.

Rowley sent a May 2002 memo to then-FBI Director Robert Mueller that exposed some of the FBI’s pre-9/11 failures. She was named one of TIME magazine’s "Persons of the Year" in 2002.

The One Thing Senate Wanted to Hear From Comey But Didn't

Trump After Ex-FBI Chief's Testimony: 'WOW, Comey is a Leaker'