Russian performers will hold a number of concerts for the veterans of the World War II at the retirement homes of the Washington, DC area on May 9. 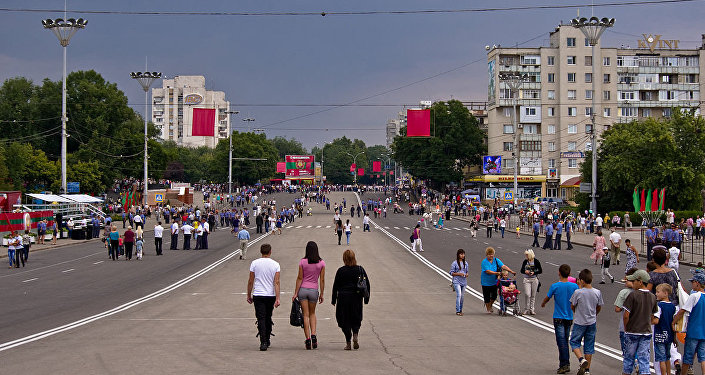 © Wikipedia / Donor
Moldova Opposes Russian Troops’ Participation in Victory Day Parade in Tiraspol
WASHINGTON (Sputnik) — Russian performers Victoria Sukhareva and Artem Starchenko will hold a number of concerts for the veterans of the World War II at the retirement homes of the Washington, DC area on May 9.

Bayan player Starchenko told Sputnik that they are planning to perform at several retirement homes on Victory Day to honor the veterans.

"On May 9, we will have several concerts "Songs of the Great Victory" for the WWII veterans living at the retirement homes of the Washington, DC area," he said. "We will perform the songs of the World War II years."

The musician continued, "Sadly, there are less and less living WWII veterans. One veteran who invited us to the Victory Day event said that last year he had 10 veterans who came to the celebration, and this year there will be only three."

Sukhareva and Starchenko will also hold the "Songs of the Great Victory" concert at the Russian Cultural Center in Washington, DC on May 5.

"The wartime songs will be performed to the bayan as this instrument best characterizes the era when, through the war, the fighters sang these songs in the dugouts and trenches," Starchenko noted.

The performers will sing the renowned songs including Blue Scarf (Siniy Platochek), I Was Driving From Berlin (Ehal ya iz Berlina), and Den Pobedy (Victory Day).

Besides, the Immortal Regiment March on May 6 will be accompanied by the songs of the WWII period performed by Sukhareva and Starchenko.

May 9 is widely celebrated in Russia and former Soviet republics as Victory Day over Nazi Germany in World War II.