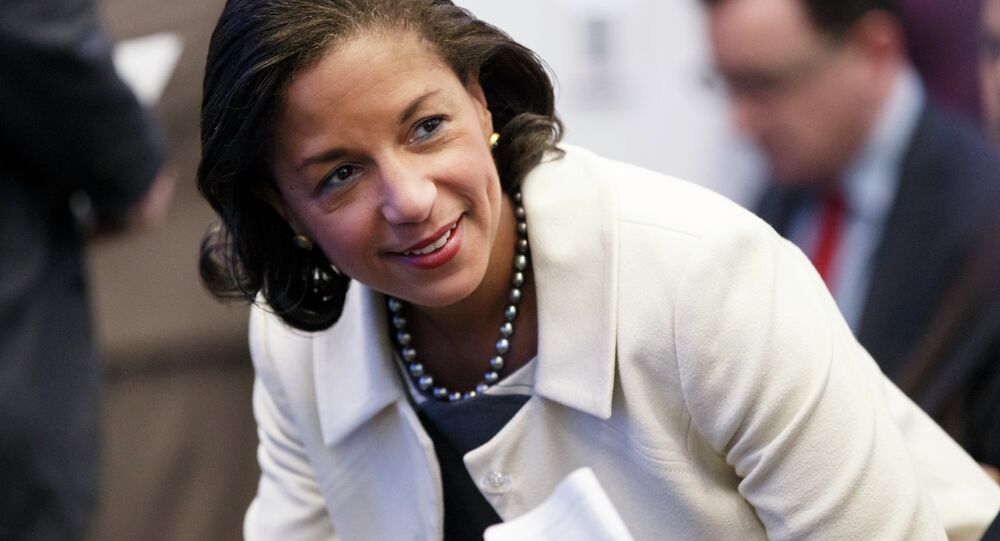 ‘Not Good’: Trump Blasts Susan Rice for Refusing to Testify on Unmasking

Former US National Security Advisor Susan Rice has rejected an invitation to testify before the Senate committee on Russian interference – and President Donald Trump had something to say about it.

Following Wednesday’s announcement that Rice would not testify, Trump sent out a pair of tweets proclaiming that her decision is “not good!”

"Susan Rice, the former National Security Advisor to President Obama, is refusing to testify before a Senate subcommittee next week on allegations of unmasking Trump transition officials. Not good!" Trump tweeted.

© AFP 2020 / Jim WATSON
Former National Security Adviser Susan Rice Behind Unmasking of Trump Team
Normally, the identities of US citizens who are not the targets of, but sometimes get caught up in, government spying, are redacted to protect their privacy. The process of “unmasking” those identities can only be requested by a select few within the intelligence community.

Information on the unmasked phone call between General Mike Flynn and Russian Ambassador Sergei Kislyak was leaked to the media – eventually ending in Flynn’s resignation from the administration.

In April, it was revealed by journalist Mike Cernovich that Rice was behind the unmasking.

Rice has maintained that the unmaskings were not the result of abused intelligence surveillance for political purposes.

“The allegation is that somehow, Obama administration officials utilized intelligence for political purposes,” Rice said in an interview with NBC’s Andrea Mitchell. “That’s absolutely false. Let me explain how this works. I was the national security adviser. My job is to protect the American people and the security of our country. That’s the same as the secretary of state, the secretary of defense, the CIA director.”

Senator Rand Paul was also unconvinced, and called for a full investigation – and for Rice to testify before the Senate.

“It is becoming clear that Rice ‘unmasked’ US citizens, including the Trump campaign and others. She is a White House political employee and we need to get to the bottom of who she did this to, why, and who else knew about it. She needs to be under full investigation and testify under oath,” Paul’s chief strategist, Doug Stafford, previously told Sputnik News.

When asked whether he believes Rice’s claim that the Obama administration did not abuse intelligence surveillance for political purposes, Stafford simply replied, “no.”