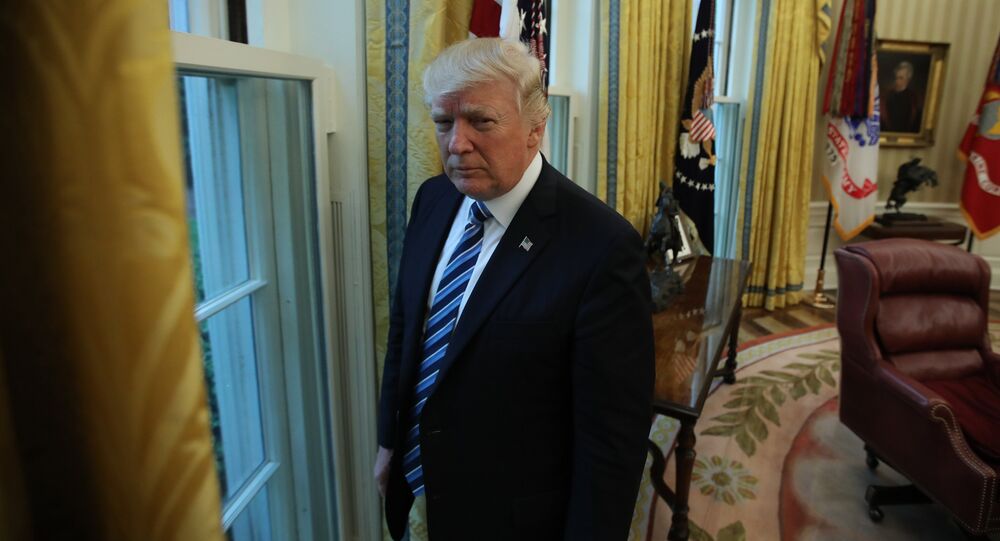 One hundred days after he took over as America’s 45th president, Donald Trump is still putting together his Cabinet and it looks like members of his inner circle have as much influence on him as he does on them.

Who calls the shots?

Dependent as he is on his team’s advice, however, Trump has recently been taking things into his own hands.

Being a dyed-in-the-wool businessman and a rookie politician, Trump got down to making good on the promises he had made while on the stump only to see many of his initiatives turned down by official Washington.

© AP Photo / Alex Brandon
Trump's Attempts to Challenge Power Structure in US His 'Biggest Achievements'
His proposed overhaul  of  the country’s healthcare system was rejected because he failed to secure the backing of the Democrats and even some of his fellow Republicans in Congress.

He was forced to get rid of his national security advisor Michael Flynn and roll back plans to mend fences with Russia.

Right now Donald Trump is trying to show Washington that he is someone who should be taken seriously both inside and outside the US.

It was apparently with this desire in mind that he ordered the recent missile strike on a military base in Syria.

About a year ago, before Tump begen his presidential campaign, the head of the Russian-American Chamber of Commerce Sergei Millian told RIA that the billionaire would play his own game, but would still depend on corporate lobbies.

“Just like any president, he will be listening to lobbyists from Big Business, the military-industrial complex and the intelligence community,” Millian predicted.

First, Donald Trump is filling the posts in his administration with millionaires and billionaires like himself. According to World Socialist Website news portal, only five members of his Cabinet are not millionaires, while the combined wealth of Trump’s 27 top advisers amounts to a hefty $2.7 billion.

Trump is also taking advice from his daughter Ivanka and her multimillionaire husband Jared Kushner. Ivanka said that she encouraged their father to carry out the recent cruise missile strike in Syria.

Ivanka, who is working for her father on a pro bono basis, is also believed to have had a hand in Washington’s changed position on the Paris climate accord.

In a clear sign of Donald Trump being forced to make compromises with “Big Washington” and fast-track the adoption of a new budget to avoid a government shutdown, his administration has agreed to continue providing health law subsidies to help low-income people afford health insurance.

Despite all these overtures to the Democrats, however, the country’s has neither a permanent budged for fiscal 2017 nor a health care reform.

The February 2017 resignation of National Security Advisor Michael Flynn over his alleged discussions of the anti-Russian sanctions with the Russian Sergei Kislyak was probably Trump’s biggest sacrifice to Washington’s political establishment.

In an article aptly titled “Trump Caves on Flynn’s Resignation,” Robert Parry wrote that the neocon-dominated US foreign policy establishment won an important victory in forcing the resignation of Flynn  “over a flimsy complaint that he had talked to the Russian ambassador during the transition.”

© REUTERS / Kevin Lamarque
Trump: Draft of New Healthcare Reform Bill Could be Ready by Next Week
“Whether US sanctions against Russia were mentioned or not, the notion that an elected president or his designees – during a transition – can have no meaningful contact with diplomats whom they may need to deal with in a matter of weeks represents a particularly contentious interpretation of a law,” Parry wrote, referring to the Logan Act, a 1799 never-enforced law that forbids private citizens from negotiating with a country in dispute with the US government.

“Flynn’s real ‘offense’ appears to be that he favors a détente with Russia rather than escalation of a new and dangerous Cold War. Trump’s idea of a rapprochement with Moscow – and a search for areas of cooperation and compromise – has been driving Official Washington’s foreign policy establishment crazy for months and the neocons, in particular, have been determined to block it,” Robert Parry continued.

Even though Michael Flynn’s forced departure was seen as a major defeat by Trump, many in America believe that the president still goes strong and is not bending under political pressure.

A most recent CBS poll revealed that 54 percent of respondents, including Democrats, believe that Trump is “changing Washington,” with only 30 percent saying it was the other way round.

Trump: Draft of New Healthcare Reform Bill Could be Ready by Next Week