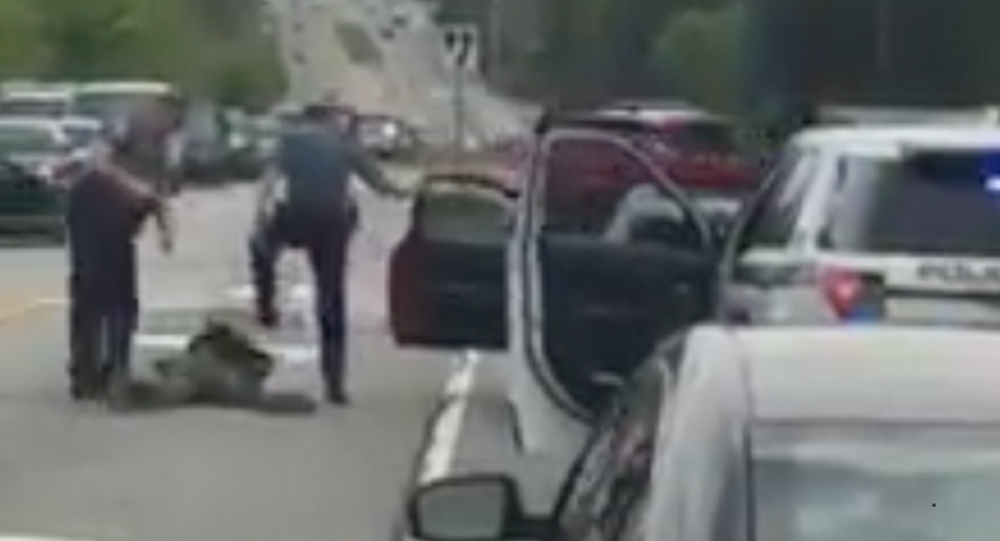 Two Georgia police officers have been fired after stomping on the face of a handcuffed black man.

Their actions were captured in a deeply disturbing witness video that was published to Facebook on Wednesday by the Black Lives Matter of Greater Atlanta group.

The shocking footage shows a man, later identified as Demetrius Bryan Hollins, 21, being yanked from a vehicle and shoved into the middle of the road, flat on his stomach. After the officer appears to handcuff him and step away, another officer comes running up to the scene. That officer immediately stomps on the man’s face.

“We are DEMANDING that Gwinnett County Police Department immediately terminate this officer who viciously kicked a HANDCUFFED BLACK MAN lying on the ground in the middle of the street (off Sugarloaf Parkway) without cause and without merit. After brutally kicking him in the face, blood splattered everywhere,” the page wrote in their post.

© AFP 2021 / Eduardo Munoz Alvarez
Divide and Conquer: NYPD Plants Undercover Cops Into Black Lives Matter Movement
The group added that are seeking to have charges filed against the officer “expeditiously.”

“We can almost betcha the Chief of Police will say, ‘I'm sorry but we can't speak on personnel matters or we are conducting a full investigation’ and after the investigation they will say… ‘We have determined to INVESTIGATE OURSELVES and found no wrong doings,’” BLM of Greater Atlanta wrote.

However, on Thursday, the Gwinnett County Police Department announced that Master Police Officer Robert McDonald was fired for assaulting the victim after being called by his supervisor, Police Sgt. Michael Bongiovanni, the first officer seen in the video.

Hours later, the department announced that Bongiovanni had also been fired, after a second video surfaced of him punching Hollins in the face while the man had his hands up.

“We acknowledge that the actions of these two officers have implications that will be felt for some time,” the Police Department said in a statement. “However, we also believe that our decisive action in terminating both officers speaks volumes about what is expected of each officer that wears a Gwinnett County police badge.”

Additionally, the department has launched criminal investigations into the incident, and the findings will be turned over to the county district attorney, who will decide on whether to file charges against one or both of the officers.