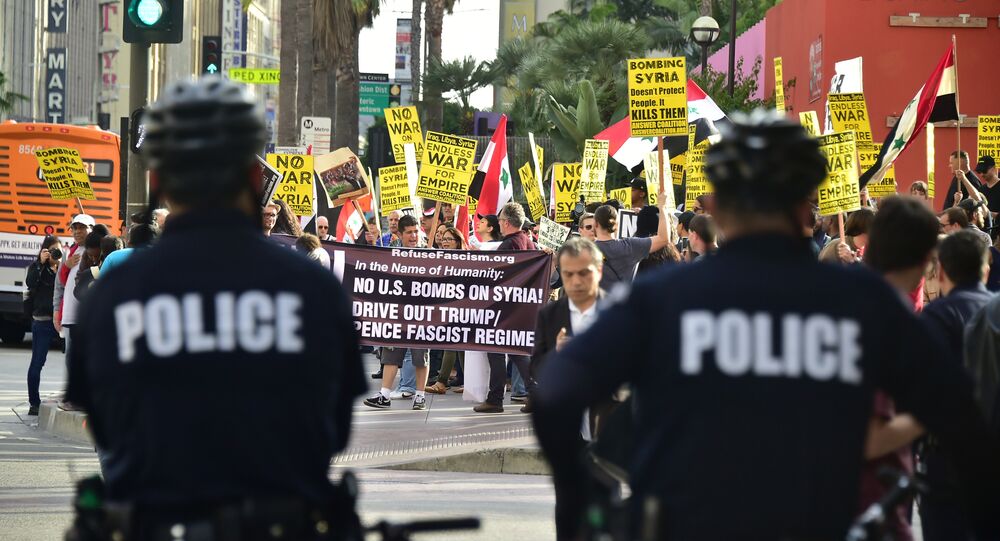 Six Arrested, 1 Injured in Clashes at Jacksonville Protest Over US Syria Strike

A total of six people were arrested and one was taken to hospital as a result of clashes that broke out at a demonstration in Jacksonville, Florida, against US military actions in Syria, local media reported Saturday.

MOSCOW (Sputnik) — The peaceful demonstration late on Friday against the country's military actions in war-torn Syria erupted into clashes with the opposing sides, which ended up in arrests of six people, the Florida Times newspaper reported.

© AP Photo / Alex Brandon
#HandsOffSyria: Protests in New York Over Syria Airstrikes
According to the Jacksonville Sheriff’s Office, an estimated 100-200 people have attended the demonstration.

Hundreds of people took to the streets in various districts of New York Friday evening to demonstrate against US missile attack on Syria’s air base.

On Thursday night, the United States carried out a cruise missile attack on the Syrian military airfield in Ash Sha’irat, located in the vicinity of the Homs city. US President Donald Trump said the attack was a response to the reported chemical weapon use in Syria's Idlib.

The US missile attack claimed the lives of 10 people, an officer of the Syrian Armed Forces told Sputnik. The Russian Defense Ministry said that the attack left two Syrian servicemen missing, four killed, and six suffering severe injuries from the fire. Homs Governor Talal Barazi said earlier on Friday that at least two civilians from a nearby village and five Syrian servicemen were killed.