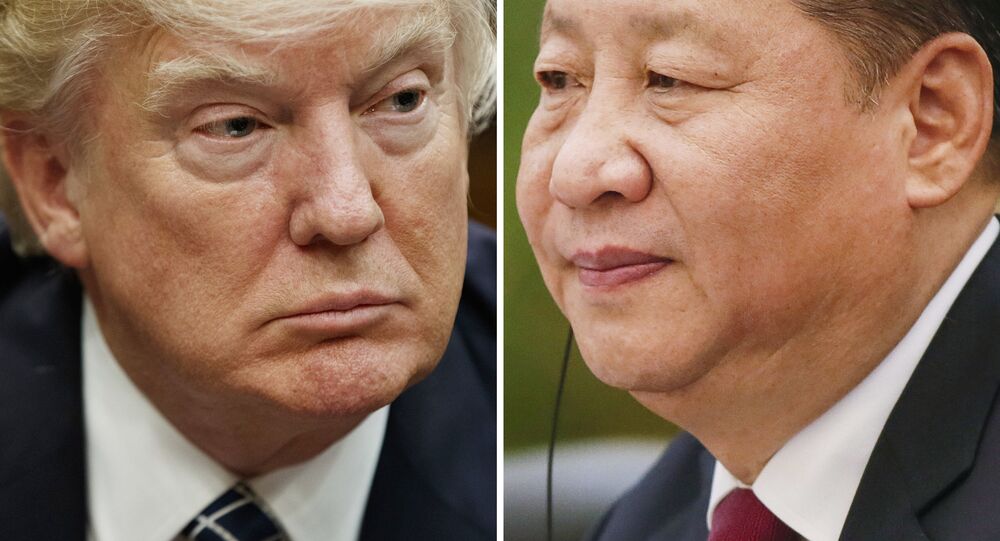 US, Chinese Presidents to Discuss Trade, Investments During Florida Summit

The United States requires China to remove trade barriers and wants a constructive dialogue with Beijing, a senior White House official said ahead of President Xi Jinping’s visit to the US. Radio Sputnik discussed the issue with Helga Zepp-LaRouche, president of the Schiller Institute, an international think tank.

During a visit to Beijing last month US Secretary of State Rex Tillerson said that under President Trump US-Chinese relations will develop positively and that there will be mutual respect and no confrontation between the two countries. This is exactly what President Xi said he hoped for in 2012.

© AP Photo / U.S. Force Korea
‘Worst-Case Scenario’: Ahead of Trump-Xi Meet, China Balks at THAAD
However, President Trump has accused China of “raping the US economy,” called China a currency manipulator and even tried to impose high tariffs on Chinese imports.

When asked about the Chinese leader’s reaction to this, Helga Zepp-LaRouche said that she didn’t think that President Xi Jinping would react to what Trump said while on the campaign trail.

“I think that if China says that it is ready to invest in infrastructure in the United States, the sides would come out of the summit with results beneficial to both countries,” she said.

Speaking about a possible solution to the considerable trade deficit the US has been running with China, and the possible creation of an investment bank by China, Zepp-LaRouche recalled President Trump’s repeated pledge to bring back the highly protectionist economic system that existed under presidents Hamilton and Lincoln, a system that hinged on labor productivity, rather than the British system that says that “you have to buy cheap and sell expensive.”

“If you look at what China has been doing the past 30 years you will see that it is much closer to the philosophy of Alexander Hamilton than the system of globalization. I think that the Chinese system of free trade differs from the one espoused by President Obama and George Bush when outsourcing made US goods less competitive compared to those made in Japan, South Korea and Germany,” Zepp-LaRouche continued.

She added that what President Trump intends to do is to make the American economy productive again.

“Infrastructure is only a precondition and there will be other areas  such as fusion technology, space cooperation with  other countries and other areas that would enable the US to leapfrog into the most productive fields, and I think this is what Trump intends to do,” Helga Zepp-LaRouche noted.

Speaking about the other issues that could be on the table during the summit, she said that North Korea would be high on the agenda, given the recent missile tests by Pyongyang.

“North Korea is reacting to the big maneuvers by the US, South Korea and Japan. It is my conviction that the only way to ensure a lasting peace on the Korean peninsula would be to promote the idea of Korean reunification and economically develop North Korea using the highly developed labor force they have there,” Helga Zepp-LaRouche emphasized.

© REUTERS / Joe Skipper
China Hopes For Positive Outcome of Trump-Xi Meeting – Vice FM
As much as he wants a constructive dialogue with China that would  lead to a mutually beneficial bilateral trade and investment between the two countries, President Trump is worried by Beijing’s actions in the South China Sea and wants them to stop.

He has also repeatedly accused Beijing of harming the US economy through unfair trade, vowing to impose high tariffs on Chinese imports.

Chinese analysts, in their turn, suggest that the main priority of President Xi Jinping during the visit will be avoiding trade wars and ensuring that the US respects Chinese core security interests.

This includes recognition of Taiwan as a Chinese province and acknowledgement of Beijing’s dominance in the South China Sea.

The US and Chinese presidents will be meeting for the first time at Trump’s Mar-a-Lago estate in Florida on Thursday.