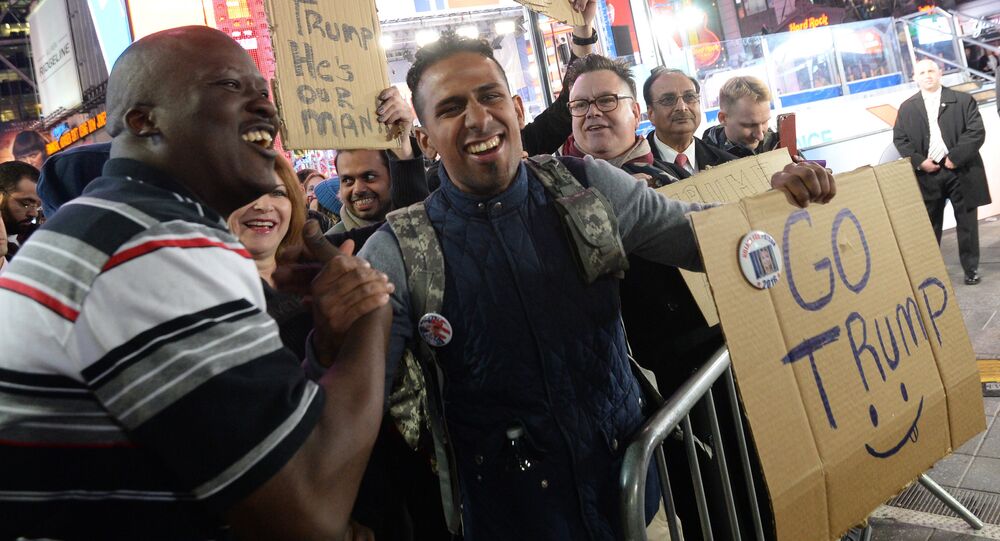 While most mainstream media in the West portrays US President Donald Trump in a less-than-respectful manner, some polls show that there are those that support his initiatives.

© AFP 2020 / Attila Kisbenedek
Putin Gains Popularity Among US Republicans, Independents
US citizens participating in a questionnaire support Trump's immigration policy, according to a Harvard-Harris poll provided exclusively to The Hill. While reactions to certain initiatives are mixed, support for Trump's hardline crackdown on so-called sanctuary cities seems to be overwhelming, according to the survey conducted between February 11-13, which covered 2,148 respondents.

Sanctuary cities refers to US cities that provide asylum for undocumented immigrants and refuse to comply with what they consider to be onerous federal rules. There is a de-facto confrontation between city officials and Trump. In response, Trump is seeking a way to strip those cities of federal funding. According to the Harvard-Harris poll, some 80 percent of those participating in the survey oppose the concept of sanctuary cities.

"While there is broad support for comprehensive immigration reform, there is overwhelming opposition to sanctuary cities," Harvard-Harris co-director Mark Penn said. "The public wants honest immigrants treated fairly and those who commit crimes deported and that's very clear from the data."

According to a Reuters analysis, the top 10 sanctuary cities in the US receive about $2.27 billion in federal funding for programs duplicated throughout the country ranging from public health services to early childhood education.

A smaller, 52-percent majority, supports Trump's two executive orders invoking a complex set of measures including increased border patrols, a crackdown on sanctuary cities, and building a wall on the US-Mexico border.

When broken down to separate policies, though, the results are more diverse.

The idea of increasing border patrol numbers by an additional 10,000 officers enjoys, at 75 percent, vast support.

© AP Photo / Andres Kudacki
Should Other Countries Implement a So-Called 'Muslim Ban'?
However, the notorious wall is the least-supported initiative, with 53 percent of respondents in opposition.

Nevertheless, 53 percent of those polled support Trump's executive order on changes in immigration policy, a part of which is widely considered to be the application of a ‘Muslim ban.' The order includes the suspension of the US refugee program for 120 days and, in a separate paragraph, denies entry to people from seven predominantly-Muslim countries for 90 days. The latter is the move that was blocked by a federal court.

An element of the Trump edicts that has largely been overlooked by the media is an order that prioritizes refugee applications from those persecuted for their religion, but only if the person is part of a minority religion in their home country, according to the BBC.

The entry ban for those seven countries — Iraq, Syria, Iran, Libya, Somalia, Sudan, and Yemen — received a 56-percent level of support in the poll.

The section of the Trump executive order considered by many to be a Muslim ban was suspended by an appeals court decision, but 38 percent of respondents say this decision makes the United States less safe. Only 26 percent said the Muslim ban would make the country safer.

The respondents share a generally negative attitude toward immigrants, with 47 percent agreeing with statements that assert that immigrants have a negative impact on the nation, while 33 percent agree that the impact is positive.

"Americans support both comprehensive immigration reform and stronger vetting and reduced refugees — they want a mix of compassion, strong borders," asserted Penn, claiming that, "They see ISIS as the greatest threat to the country and that is spurring concerns about refugee migration."