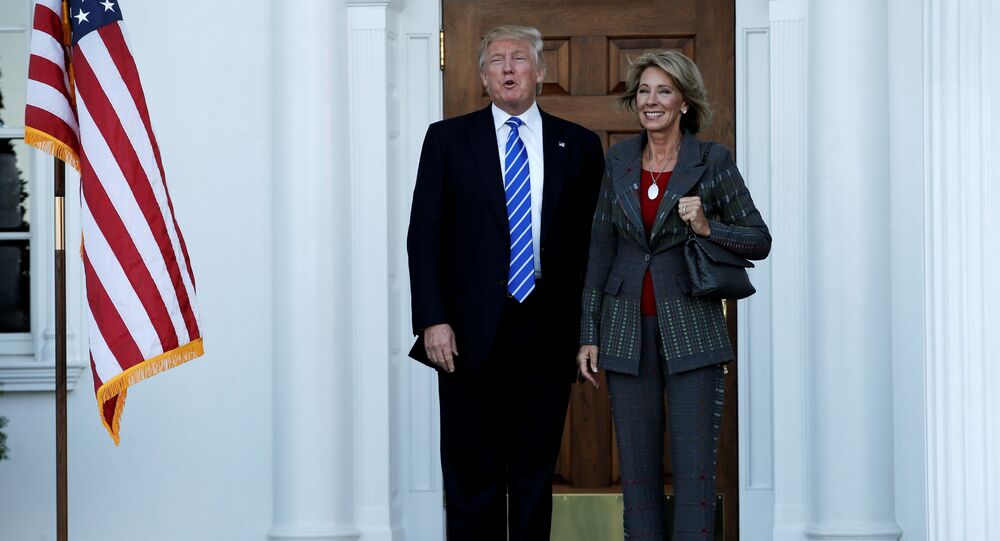 Elizabeth "Betsy" DeVos’ bid to become the next US Secretary of Education drew several hundred protesters to the Capitol on Monday evening, including teachers, school administrators, and lawmakers, among others.

WASHINGTON (Sputnik), Andrew Feinberg — The assembled crowd hoped to use whatever influence they have to convince a 51st Republican Senator to vote against confirming DeVos. But with the Senate in a 50-50 deadlock the tie-breaking vote would fall to Vice President Mike Pence, a Republican who would undoubtedly vote to confirm DeVos as President Donald Trump’s choice to lead the US Department of Education.

But the movement against DeVos may be making some headway, Democratic Whip Richard Durbin said during a speech at the rally, evidenced by hundreds of phone calls his Illinois office received urging him to vote against DeVos.

"On Wednesday we received 600 calls against Betsy DeVos… and for her, only 3,” Durbin said. “This is what is happening all across the state of Illinois, from Chicago to downstate, they all understand several basics — she is unprepared for the job."

"We know what schools mean for the future of America — parents know it, children know it, we all know it. We need a leader who understands that public education is the bedrock of the future for America’s progress," he said.

Connecticut Senator Richard Blumental thanked the assembled protesters for coming out, particularly the ones who came representing public school teachers unions. "You are our heroes," Blumenthal said.

© REUTERS / Carlo Allegri/File Photo
Michigan Philanthropist Betsy DeVos Ready to Advance Trump Education Agenda
When Blumenthal asked the crowd how many votes were needed to stop DeVos, they launched back into the chant that had been their mantra all evening: "Just! One! More!"

Trump selected DeVos based on her many years as an education activist and Republican donor, during which she has contributed millions of dollars to the Republican Party as well as towards ballot initiatives and lobbying efforts to promote charter schools and voucher programs that allow public funds to be spent on private religious schools. DeVos is a product of those religious schools, having attended high school and college at institutions run by the Reformed Church, of which she is a longtime member.

US Deficit Reaches $113Bln in July With Cuts in Health, Education Spending