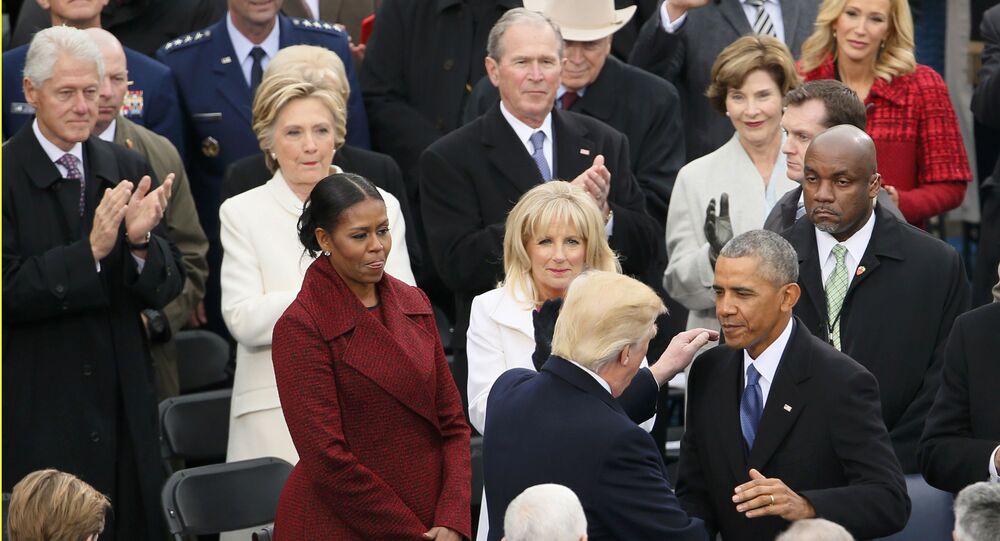 Clintons, Trumps and Obamas to Stay in the Political Arena for 'Decades to Come'

The new US President has been sworn in, and well-known Russian political consultant Evgeny Minchenko has provided a comprehensive analysis of the key factors which led to Trump's victory and Clinton's failure. More interestingly, he forecasted the political future of the two candidate's families as well as Obama's.

Evgeny Minchenko, the President and Chief Executive Officer of Minchenko Consulting Communication Group and the Chairman of the Political Consulting Committee of the Russian Public Relations Association, is convinced that the families of America's last president and the Democratic presidential nominee won't leave the political arena in the decades to come.

© REUTERS / Jonathan Ernst
The Secret of Trump: What the Realpolitik of the 45th US President Will Be Like
Moreover, the political scientist has provided a detailed analysis of why the two families will be playing key roles in US politics.

Here is his reasoning.

"Judging by his drawn out farewell [while still] president and relatively high approval ratings upon departure, Barack Obama will continue playing a serious role in US politics," reads Minchenko's article for the Carnegie Moscow Center's website.

"He will take advantage of Hillary's failure in order to minimize Clinton's influence in the Democratic Party," he suggests.

One of the steps in this direction, the political consultant says, has been the recent announcement of departed vice-president Joe Biden that he might run for president in 2020.

"By the way, it was Biden, who, regardless of his age (he is 74 now and will be 78 at the time of next elections) had a much better chance against Trump, due to his popularity among so-called "blue-collar workers". Those were the "blue-collar workers" who changed their [party] preferences, dealing a "coup de grace" to Clinton's campaign," he writes.

Minchenko further notes that Michelle Obama is also being promoted as a political figure, hence there is a chance to watch the campaign of the first black female president, since Clinton already launched a campaign to become the first female president.

© REUTERS / David Becker/Nancy Wiechec/Files
Clinton is 'Guilty as Hell': Trump Returns to His Campaign Rhetoric
The political analyst also notes that the negative reaction of Clinton's fellow party members to her plans to run for the post of mayor of New York and her age fare decreasing the weight of the Clinton's clan. However, they will be able to secure their extensive network of contacts.

They have already leaked the information, he says, that former first daughter Chelsea Clinton is reportedly being groomed to become a congressional candidate.

The New York Post has recently reported that Chelsea Clinton, 36, is "being eyed to take Rep. Nita Lowey's place when the 79-year-old incumbent decides to leave the House of Representatives."

As for the Trump family, the analyst says, there is the interesting tandem of Trump's daughter Ivanka and her husband Jared Kushner, who are expected to play a certain role in the new administration.

According to the research of his consulting communication group, the two already started building up their political clout during the period of transition of power, Minchenko concluded.