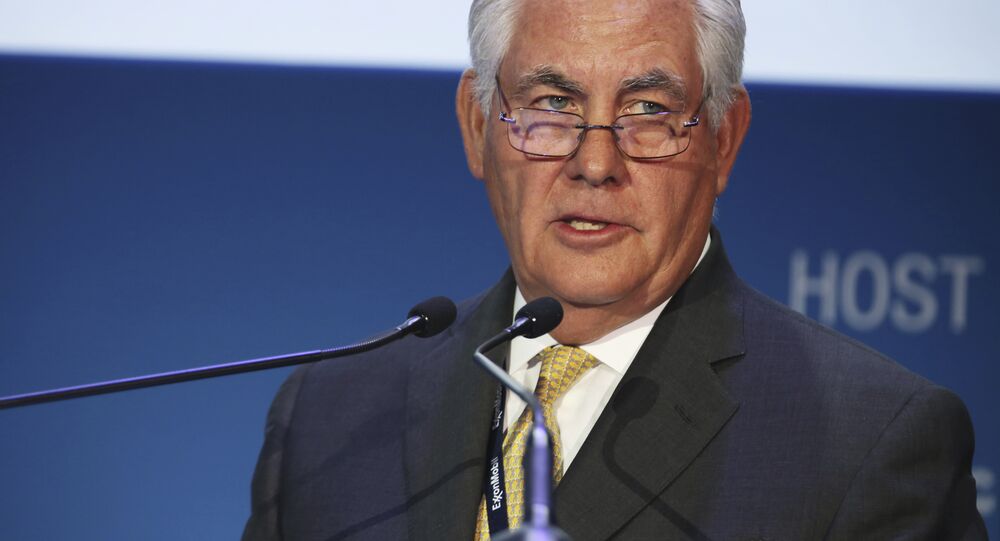 © AFP 2020 / ERIC PIERMONT
Trump Ally Giuliani: Tillerson's Russia Ties Not Unusual for Oil Company Leader
WASHINGTON (Sputnik) – "Throughout his campaign, the president-elect indicated his intent to pursue relations with Russia," Earnest said at a briefing. "What better way to do that than to choose somebody who has been awarded the Order of Friendship by Vladimir Putin to be your secretary of state? This is not a particularly surprising or unexpected development."

The spokesman was referring to Tillerson’s receiving the Order of Friendship from the Russian government in 2013. Exxon Mobil has several joint ventures in Russia with domestic energy companies there, with many of the deals overseen by Tillerson

The career oilman’s nomination was confirmed earlier Tuesday by Trump’s transition team. The selection is subject to review by the US Senate.

Following the announcement, Senator Ben Cardin, ranking Democrat on the Senate Foreign Relations Committee, wrote in a Twitter post that he was “deeply troubled” by Tillerson’s business ties to Russia.

However, Trump praised Tillerson for his experience doing business with foreign governments on behalf of Exxon Mobil, which operates in over 50 countries.

Incoming White House chief of staff Reince Priebus said in an interview that Tillerson has a proven ability to negotiate with foreign leaders.

Estonia Ready to Cooperate With US State Secretary Pick Tillerson