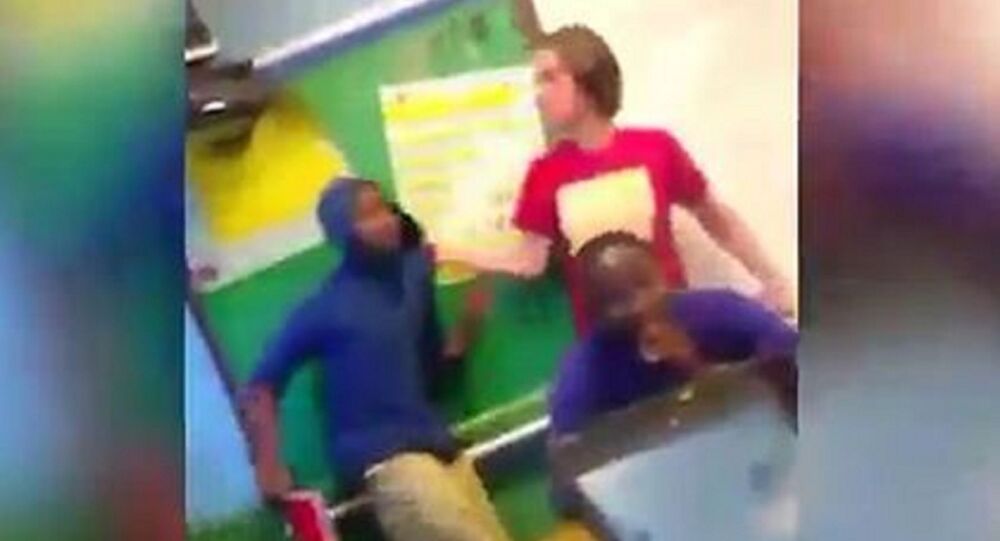 The incident took place at Harlem Park Elementary/Middle School on Tuesday, but was not reported to the school district until Wednesday after a parent posted a video of the verbal abuse to social media.

Mobile County Public Schools
Alabama Language Teacher on Leave After Racist Math Quiz
The shocking video, filmed by an eighth grade student in the classroom, went rapidly viral and was viewed millions of times by Thursday.

In the footage, a science teacher who has not been publicly identified is seen losing control of her class and becoming increasingly agitated and aggressive. At one point she is seen grabbing a black student by the hood of his jacket and kicking him out of the classroom. She also refers to the students as “idiots” and “stupid.”

“You just sit here and do nothing day after day after day. Get out!” she yells at the student. She then turns to the class and directs her tirade at the rest of them, declaring that they “are getting zeroes for doing nothing!”

The distraught teacher then tells the students that if they do not receive an education they will end up as “punk ass n*****s” who are “going to get shot!”

Students responded to her comment with shock and appear visibly stunned by her outburst. That did not stop the teacher from continuing her verbal abuse, however.

© Flickr / Jeremy Brooks
Crime and Spanishment: Teacher Resigns After Punishing Kids for Spanish-Speaking
Baltimore schools CEO Sonja Santelises told the Baltimore Sun that she was “appalled” by the video. "There are many people who struggle with classroom management, but they don't resort to hate language," she said. "We can't provide enough support to counteract what's in someone's heart."

The school district released a statement saying that the teacher’s contract had been terminated.

“Yesterday a middle school science teacher at Harlem Park Elementary/Middle School engaged in verbally abusive behavior and made racially charged comments directed at students. The teacher involved in the incident is no longer employed by City Schools,” a statement from Baltimore City Public Schools read.

“At Baltimore City Public Schools, we are committed to creating positive and equitable learning environments in school communities where all members are welcome, supported, and valued,” the statement continued. “No form of discriminatory behavior of any kind is or will be tolerated.”

On 1st Day of School, Oklahoma Teacher Shows Up Drunk and Without Pants