The chairman of the US House of Representatives’ Natural Resources Committee, Rob Bishop, on Tuesday blamed President Barack Obama’s administration for encouraging protests that have caused a delay in building the Dakota Access Pipeline.

WASHINGTON (Sputnik) — Bishop argued that the route for the oil pipeline has been approved through a permitting process that followed established federal regulations.

“From the beginning of this controversy, the Obama administration exploited Native Americans to advance an obstructionist and radical environmental agenda,” Bishop said in a news release. “The president’s increasingly autocratic interventions create massive uncertainty that jeopardizes future infrastructure investment and development.”

On Monday, the US Department of Interior praised the Army Corps of Engineers and the Standing Rock Sioux tribe of Native Americans for agreeing to talks about the pipeline. The talks were announced just after the department said it was delaying the granting of an easement to enable the pipeline to be constructed along its current route. 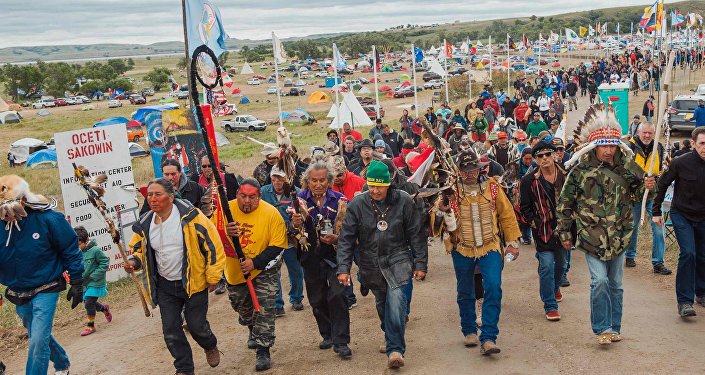 As for ongoing protests against the project, the Interior Department said in a statement Monday that it supports all Americans’ right “to assemble and speak freely, and urge[s] everyone involved in protest or pipeline activities to adhere to the principles of nonviolence.”

Late Monday, Texas-based Energy Transfer Partners and other companies involved in the project filed a lawsuit asking a federal judge in Washington, DC to order an end to what they called the Obama administration’s “political interference in the Dakota Access Pipeline review process.”

The companies have sought the legal easement, which confers the right to cross an owner’s land or water, for a tunnel designed to carry the pipeline under Lake Oahe.