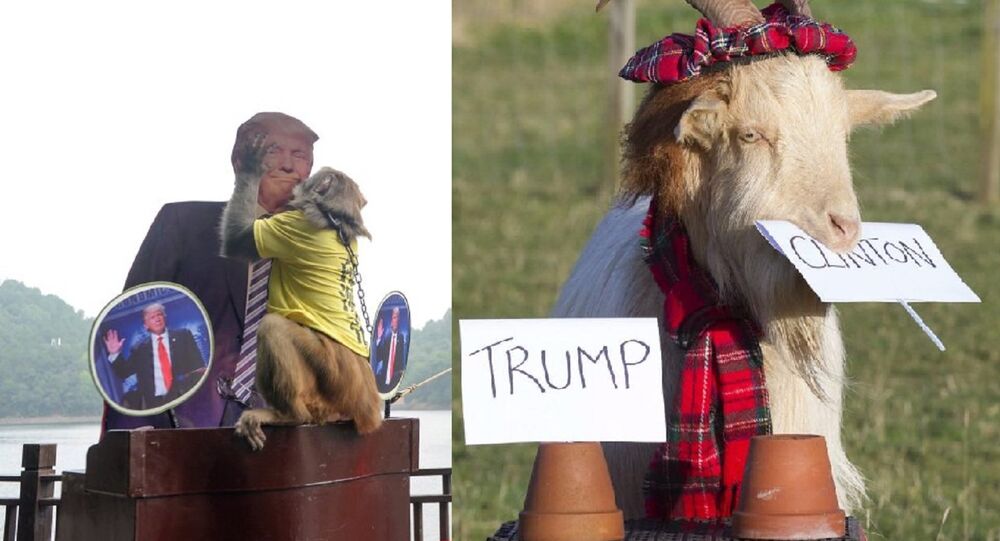 Since pollsters, citizens, and the media all seem to have no idea who will win tomorrow’s presidential election, “psychic animals” are now being consulted.

In Scotland, a goat named Boots that rose to fame by predicting futures for his fans across the nation has chosen Hillary Clinton as the big winner. Earlier this year, the 3-year-old Golden Guernsey goat, who wears a tartan hat and scarf, correctly predicted the outcome of the Brexit vote when pollsters and pundits had no clue.

The global psychic animal kingdom appears to be in disagreement however, as last week Gena, a famous monkey in China who has been dubbed the "the king of prophets," called the election for Trump by lovingly kissing a cardboard cutout of the candidate on the face.

The five-year-old simian clairvoyant rose to fame after correctly predicting the outcome of the 2016 Euro cup, indicating that Portugal would win, days before the game took place.

Meanwhile, two sharks are also racing to determine the winner of the election. Nova Southeastern University in Fort Lauderdale, Florida, has tagged two sharks and is tracking the miles traveled by each. The sharks have each been designated as a candidate, and the one who travels the farthest distance would call the race.

“The rules are very simple: On Monday, Sept. 26, as the human candidates took the stage for their first debate, NSU researchers starting tracking the Clinton Shark (whose motto is ‘Swimming Stronger Together’) and the Trump Shark (whose motto is ‘Mako America Great Again’) as they do what mako sharks do, that is, swim in the Atlantic Ocean,” their press release explained.

In July, staff from Cleveland.com took to a dog park to figure out the winner.

“They placed one treat on the lap of two chew toys resembling the candidates and let dogs cast their votes. In a close race, Trump won,” the International Business Times reports.

In Arkansas last month, the Scott Pumpkin Patch held a pig race with one wearing a Clinton wig and the other wearing a Trump wig. The Trump pig one in that race as well.

While the animal kingdom seems to be rallying to call this thing for Trump, many say Clinton’s still goat a chance.

US Stocks Rally One Day Before Presidential Election

What to Expect From US-China Relations After November 8 Election

US Election Eve: Trump's 'Achilles Heel' and Clinton’s 'Reputation as a Liar'

Obstacles to "Democracy" in US Election System