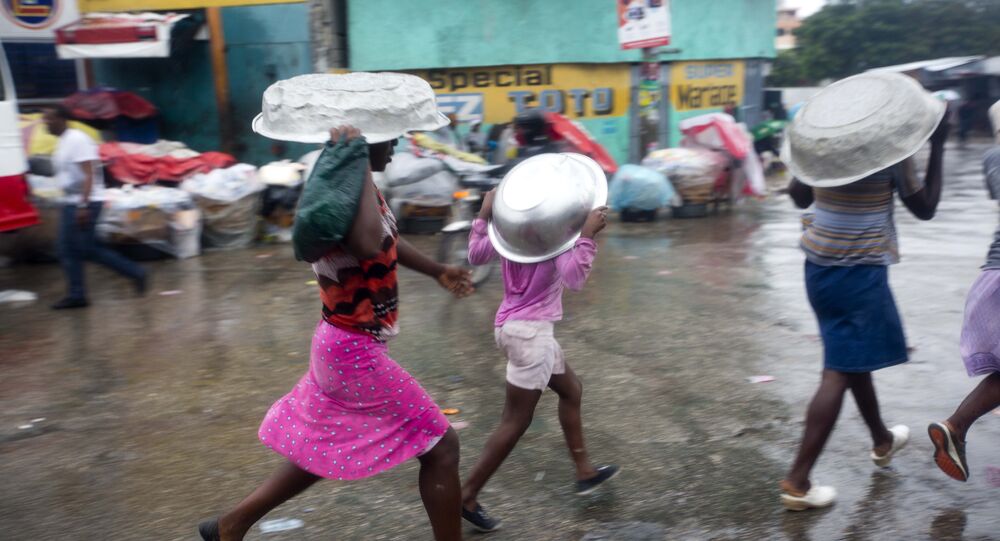 Hurricane Matthew Batters Haiti, Heads Toward US for Direct Hit

Deadly Hurricane Matthew, ripping across the Caribbean, is now assaulting the Haitian coast, and is on a direct path toward the east coast of the United States.

The storm has killed at least seven people — four in the Dominican Republic, one in Haiti, one in St. Vincent and the Grenadines, and another in Colombia.

On Tuesday, Haiti, the poorest country in the Western Hemisphere, was battered by the strongest storm it has seen since Hurricane Inez in 1966. Some areas in neighboring Dominican Republic received over five inches of rain in one hour. While it remains too early to assess the destruction, the country's Civil Protection Agency has confirmed that infrastructure has been severely damaged.

"It's much too early to know how bad things are, but we do know there are a lot of houses that have been destroyed or damaged in the south," Marie Alta Jean-Baptiste, the director of the Civil Protection Agency, told the Associated Press.

Significant flooding and many downed trees have also been reported.

More than 6,400 people have been evacuated into temporary shelters, but many are scared to leave their homes and shacks, for fear of being robbed while they are away.

"If we lose our things we are not going to get them back!” Toussaint Laine, a resident of Tabarre, told AP.

The hurricane is expected to dump as much as 20 inches of rain on areas with lower elevation, and as much as 40 inches in the mountains.

"This could be catastrophic for some places, particularly Haiti," hurricane center spokesman Dennis Feltgen told USA TODAY. "This is an area where trees just don't exist (due to deforestation). The terrain is stripped, and the threat of major flash floods and mudslides is very real."

Three US Navy ships are now en route to the island nation to assist with relief efforts.

Hurricane Matthew is currently on track to head to Cuba, where the National Hurricane Center is warning of storm surges that could reach 11 feet on the southern coast.

The US Navy has evacuated 700 non-essential personnel, as well as spouses and children, from the notorious Guantanamo Bay detention center. Evacuees were boarded onto cargo planes and flown to Pensacola, Florida. Only personnel required to protect the base and the detention facilities remain. Those who stayed behind have been warned to keep an eye on each other to make sure nobody goes missing as the hurricane hits.

Twitter: CapitalWeather
Hurricane Matthew to Show Horrific Cost of Clinton Foundation Theft From Haiti
The storm appears to be moving on a path that will land over the US, anywhere from Florida up the coast to North Carolina, and possibly northward.

"Unfortunately, the models continue to show a westward trend," Weather Channel meteorologist Kevin Roth said early Tuesday morning. "That means the potential for a landfall or some impacts in the US is increasing."

On Monday afternoon, both Florida Governor Rick Scott and North Carolina Governor Pat McCrory declared states of emergency. In Florida, an alert went into effect in every county in the state to ensure resources for evacuations and sheltering, should the hurricane turn in their direction.

“Although Matthew is not currently projected to directly impact Florida, we all know how quickly the track of these storms can change,” Scott told reporters. “While there are no evacuation orders currently in place, this storm could threaten our state with very little notice and no one should be caught off guard. If an evacuation order is activated in your area, leave immediately. Once severe weather comes, our first responders will not be able to rescue you until the weather subside.”

Hurricane Forces Evacuation of 700 US Families from Guantanamo

Hurricane Matthew to Cause Catastrophic Loss of Life in Haiti, Hit US Next Week