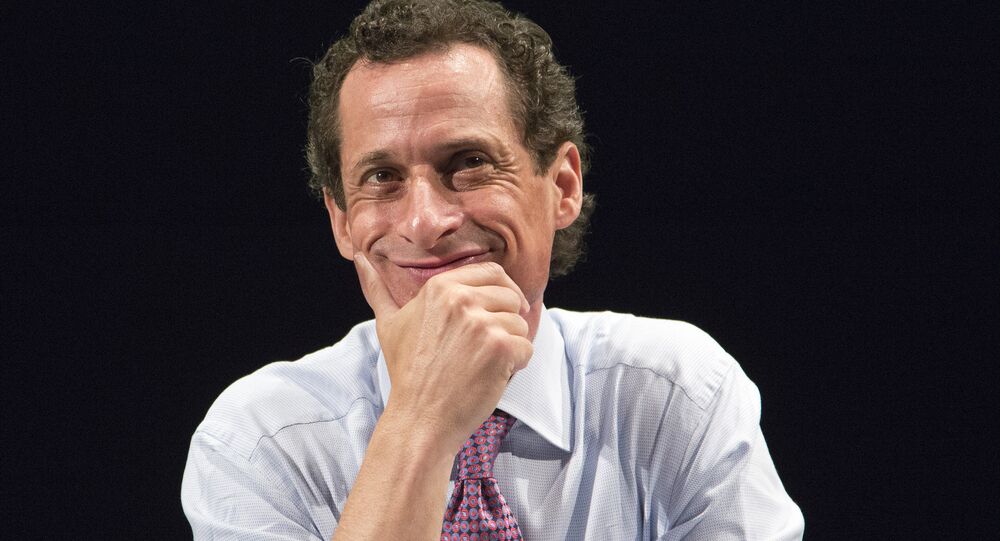 © Flickr / Azi Paybarah
WeinerGate: Former US Lawmaker Busted Sexting Again, Wife Announces Separation
The former lawmaker made headlines once again this week, as yet another sexting scandal prompted his wife, Hillary Clinton’s top aide Huma Abedin, to finally leave him. He was also placed on indefinite leave by NY1, where he was a contributor.

The scandal marks his third bust for sexting. The first instance was in 2011 when he tweeted a photo of his crotch, which lead to his resignation from Congress. The second was during his run for mayor of New York, when now-pornstar Sydney Leathers went to the media with their explicit chats.

This time, explicit chats between Weiner and a “busty brunette” were obtained by the New York Post, including a photo of his crotch, taken with his five-year-old son sleeping in the bed in the background.

Charles Anderson, the vice president of porn.com, has taken pity on the disgraced politician however, and has offered him a “love and sex” column that would include the reviewing of pornographic films. The column, should he choose to accept it, would be titled “Dear Mr. Weiner.”

“This is a serious and sincere offer as we wish to appoint Anthony Weiner our first-ever, love and sex columnist for Porn.com.”

“This offer is not made in jest. To show our sincerity, Flynt Management Group, LLC is willing to pay twenty percent more than your former Congressional salary, ensuring that your medical benefits would be equal to what you were previously receiving. While you will have to relocate to our corporate offices in Beverly Hills, California, we would pay for all relocation costs,” Flynt wrote in the Huffington Post at the time.

Weiner’s wife Abedin has worked closely with Clinton since the 1990s, during Bill Clinton’s presidency. She has stayed by the former First Lady’s side ever since.

Weiner’s sexual scandals were chronicled in a now-popular documentary called Weiner, in which Abedin’s contempt for her likely soon-to-be-ex-husband was impossible to miss.