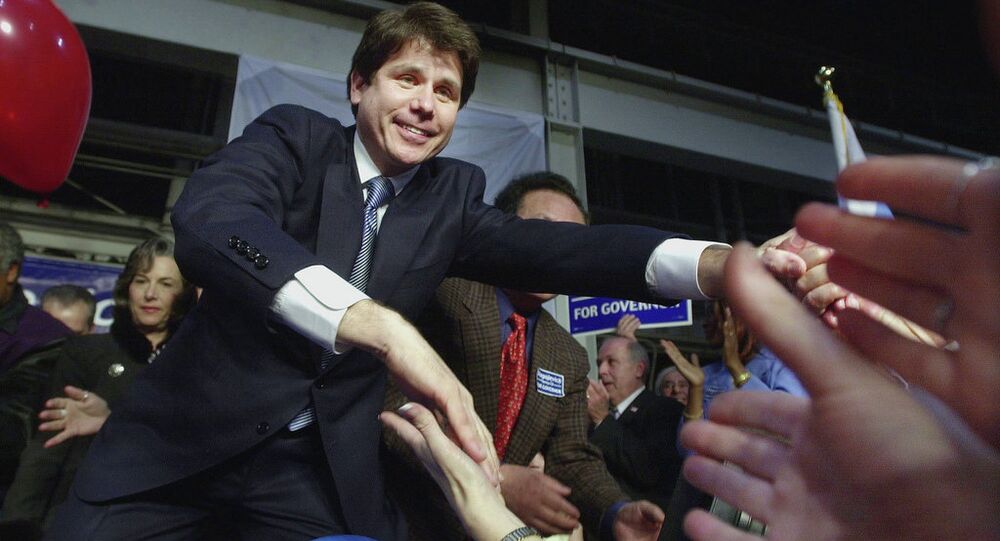 "In order to convict him on these counts they changed the law, literally," Goodman said on Tuesday. "They twisted the law in order to put him in prison and that is a danger."

Blagojevich, Goodman argued, never promised favors for campaign contributions, but did tell President Barack Obama that he would appoint the president's pick for a vacant US senate in exchange for a cabinet post.

"That was the center of the case against him originally, but that part has been overturned as the appellate court correctly found that was a political deal and it was not corrupt," Goodman stated. "To make an example of Blagojevich, when what he did was allowed under the law that was established by the Supreme Court in 1991, seems unfair."

By the standard under which Blagojevich was judged any US politician could be taken down at the whim of a US federal prosecutor because every time a large donation is requested it is connected in some way to some official act, he added.

Blagojevich's first trial resulted in a hung jury and so the jury instructions were rewritten for the second trial in order to convict him on other counts, Goodman claimed.

"It’s hard to tell now what’s legal and what’s not," Goodman noted. "Foreign donors giving money to a foundation and then getting access to the [US] State Department seems like that could be prosecuted but the Obama administration has chosen not to prosecute her [Hillary Clinton]."

A newly released batch of 725 US State Department emails are fueling claims that the Clinton Foundation provided big donors special access to Hillary Clinton when she was secretary of state, according to a Monday press release by legal watchdog Judicial Watch.

On August 9, the former governor’s attorneys asked Judge Zagel for a five-year prison term, citing Blagojevich’s good behavior in prison. Prosecutors argued that Blagojevich was not rehabilitated and has never admitted criminal responsibility for his actions.

Death Toll From Floods in Missouri, Illinois Rises to 23