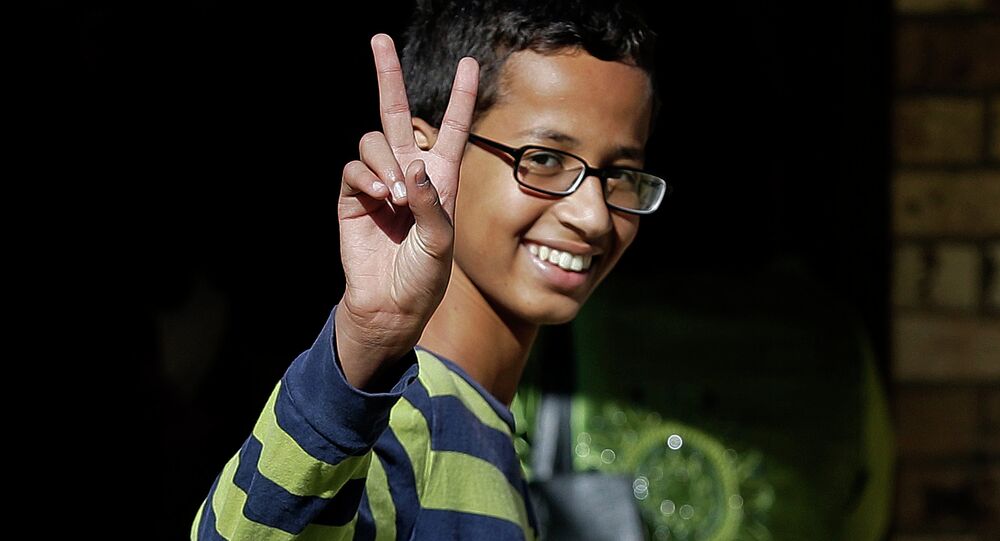 The family of the 14-year-old Muslim boy who was arrested at his Texas school last year after bringing a homemade clock to school has filed a civil rights lawsuit.

© AFP 2019 / Ashraf Shazly
Muslim Teen Arrested for Homemade Clock Meets Sudanese President Bashir
Ahmed Mohamed, better known as the “clock boy,” made international headlines September 2015 after he was arrested and charged with having a fake bomb. The teen explained that it was a homemade clock he had brought in to impress his teacher at his school in Irving.

Following the story’s speedy viral flight, the teen was invited to the White House, met US President Barack Obama and, later, visited with the president of his home country of Sudan, Omar al-Bashir, who is a wanted war criminal accused of orchestrating a genocide during the Darfur conflict, beginning in 2003.

The teen and his family visited in spite of the charges against Sudan’s president, stating that it would be rude not to accept.

Ahmed’s father, Mohamed Hassan al-Sufi, is a Sudanese immigrant to the United States, and himself a former presidential candidate in Sudan, who ran against Bashir last year.

The charge against the teen was dropped, but he remained suspended from school, and the Mohamed family subsequently moved to Qatar, claiming that they were the target of threats. Ahmed received, according to a family spokesperson, a scholarship in the Persian Gulf nation.

In November, attorneys for the teen announced that they were seeking a $15 million settlement for his mistreatment.

The law firm representing the 14-year-old stated that they have sent letters requesting $10 million from the city of Irving and $5 million from the Irving Independent School District over the incident. The letters also demand written apologies and threaten further lawsuits.

“As American citizens, all of us — even the ones with ‘Muslim-sounding’ names like Ahmed Mohamed — are entitled to have public officials with whom we come in contact to respect our rights,” a letter addressed to Mohamed’s former school district states.

His attorneys have stated that he suffered “severe psychological trauma” from the events and that his “reputation in the global community is permanently scarred.”

“If you fail to comply with the above demands within 60 days from the date of this letter, you should expect that we will file a civil action addressing the causes of action and events described in this letter,” one of the letters concluded.