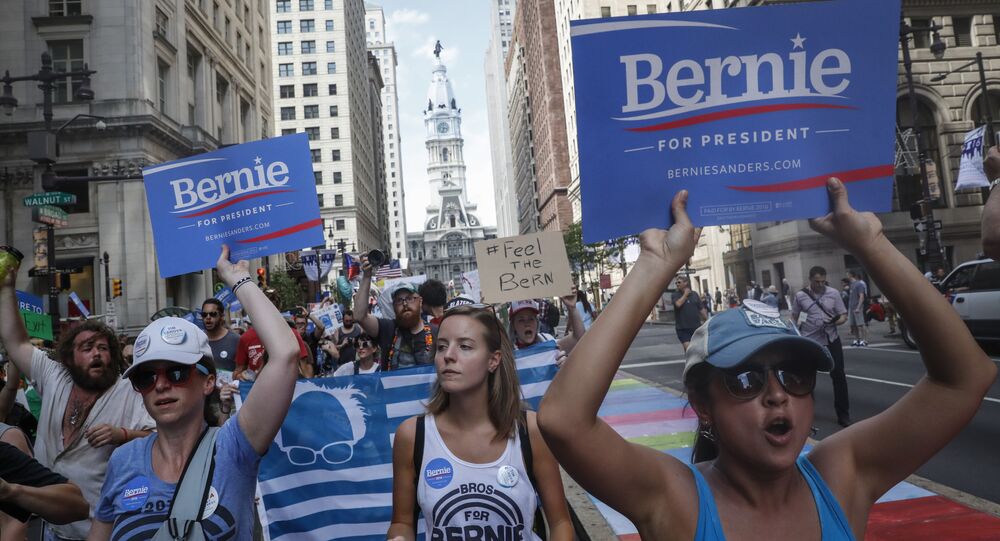 Recently, Senator Bernie Sanders has called for his supporters to rally around former Democrat Party rival Hillary Clinton, to vote for her candidacy to be president of the United States, and to act as a united front against the campaign to elect Donald Trump.

Radio Sputnik’s Loud & Clear speaks with Michigan attorney Julie Hurwitz, who served as a Sanders delegate to the rules committee, about how Sanders’ supporters have responded to their candidate’s request to back the former first lady.

​"There’s a definite split within and among the Sanders campaign itself," Hurwitz said. "I think there’s a lot of Democrats who simply identify with Bernie’s message and with his platform and joined his campaign. Then there is the large number of young and politically active community activist people who really don’t identify with the Democratic Party, but identify with Bernie."

Hurwitz said that the tension within the Sanders camp is happening chiefly "between those who are saying, 'We have to vote for Hillary no matter what to defeat Trump' and those who are saying, 'No, I’m not going to compromise my ideals and my principles to play into a game that is a continuation of the status quo.'"

Loud & Clear Host Brian Becker noted that what made Sanders so attractive to progressive voters was his call for a "political revolution.’" Becker asked Hurwitz how Sanders’ supporters reacted when he encouraged them to support Clinton during his address to his delegates at the Democratic National Convention on Monday.

Hurwitz recalled the speech. "At the moment that he made his statement about us supporting the Hillary campaign," she said, "the way the mass media has been spinning it, is that Bernie’s own people were booing him, and I take strong issue with that. The people in that room were not booing Bernie Sanders, they were booing Hillary Clinton, they were expressing their discontent with the idea of having to support someone they don’t support. That was less than a minute of his entire presentation to us, and those folks continue to strongly support him, continue to strongly be behind him and his message and his views."

Hurwitz detailed her experiences on the rules committee and challenged the notion that the presence of Sanders supporters on delegate committees was a compromise between the two Democratic camps.

"It was not a compromise for Bernie to have representation on the committees,” she said. “These committees were appointed based on votes that he got during the primary. So he had rights to that representation."

She said her time on the rules committee was "very frustrating, but also interesting… When the proposals were put forward to eliminate the superdelegates, we were all given an opportunity to speak, we were allowed to present our positions, but it was so obvious that there was no dialogue that was going to happen on the floor of the committee, that for every 10 people that spoke in favor of eliminating superdelegates and limiting the role and power of the superdelegates, there were maybe two folks in opposition. It was a straight party-line vote for every single proposal that was put forward by our team."

Hurwitz suggests that currently, Sanders’ supporters find themselves having to choose between conscience and fear.

"There are those who simply believe we have to defeat Trump no matter what….Then there are those who were drawn into the Sanders campaign, not because of any allegiance to the two-part system, in fact most have been repulsed by the power of the two party system in this country, and they are not going to compromise their principles."